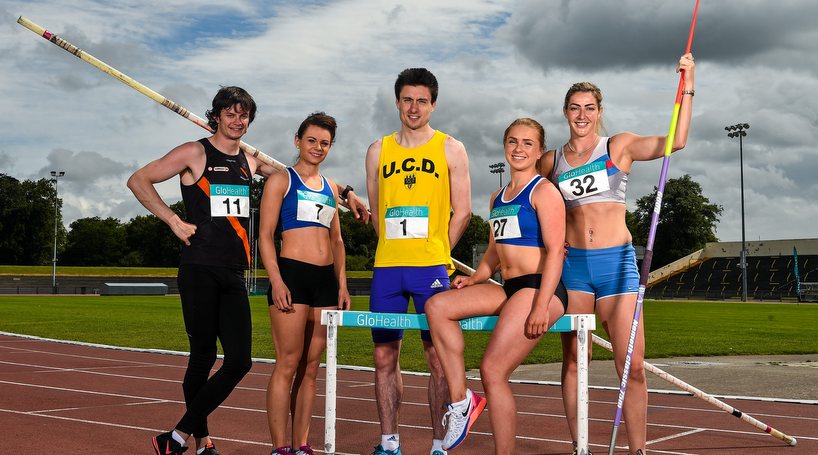 European 800m silver medallist and Rio 2016 hopeful, Mark English (UCD AC), today launched the six week countdown to the GloHealth Senior Track and Field Championships 2015. On Saturday 8th and Sunday 9th of August, Morton Stadium, Santry, Dublin, will become home to some of Ireland’s brightest and most dedicated athletes as they battle it out to claim one of 40 national titles in both track and field sports. Tickets are on sale now via the link below:

The event, the pinnacle of the Irish athletics calendar, will feature over 500 athletes from all over Ireland, competing in 40 competitions across several different disciplines. The GloHealth Senior Track and Field Championships is also the last opportunity for international athletes to achieve the coveted qualification standard for the International World Track and Field Championships taking place in Beijing this August.

The event is the perfect, fun-filled family day out and it is a great opportunity for kids to come along and be inspired by some of Ireland’s finest athletes. There will be a chance to meet and greet some of the biggest names in Irish sport and for kids who are up to the challenge, they can try out the GloHealth Fitzone, which will be packed with mini track and field activities. Bring your little ones down to try their hand at the shot-putt or jumping the hurdles. You might discover a natural talent and Ireland’s next sporting star!

This year’s GloHealth Championships will feature a number of leading lights, many of whom will be competing on the international stage in the coming months. European 800m Medallist, Mark English (UCD AC), who won his first national title at 18 years of age in 2011 and a second in 2014, will be vying to pick up a third title before he heads East for the World Championships in Beijing.  Reigning European number one 400m Hurdler Thomas Barr (Ferrybank AC) will be hoping to make it five in a row at these Championships.

Sprinter/jumper Kelly Proper (Ferrybank AC) will endeavour to increase her medal tally and further solidify her status as one of the most prolific Irish champions of all-time, having won 15 outdoor titles to date.

In the field events Sean Breathnach, of the Galway City Harriers, will aim to make it a lucky seven in 2015 having been Shot Putt National Champion six times. Irish Javelin Record Holder Anita White Fitzgibbon (Dundrum South Dublin) is the reigning national champion and will be keen to retain her title this year. Another athlete who will be working hard to retain his title is Pole Vaulter Ian Rodgers (Clonliffe Harriers), who broke his club-mate David Donegan’s six year winning streak when he claimed the title last year.

Mark English, European Champion silver medallist in 800m, said: “The GloHealth Senior Track and Field Championships are a really important and exciting event. Ireland’s top athletes all come together to battle it out and while tensions are high, nothing can beat that level of competition and hopefully seeing all the hard work and training pay off. The event itself has an infectious atmosphere which can’t be matched and it’s great to have that level of support”.

Jim Dowdall, CEO GloHealth, said: “This is GloHealth’s second year as sponsor of Athletics Ireland’s and we are really looking forward to seeing our top athletes compete at the GloHealth Senior Track and Field Championships. Last year the competition was intense but with the Worlds and Olympics on the horizon we expect everything to move up a notch this year. This is also a wonderful event for spectators and I’d encourage everyone, young and old, to come along to witness wonderful sporting moments and soak up the fantastic atmosphere.”

John Foley, CEO of Athletics Ireland, said; “Our national championships are an incredible weekend of top class athletics – we are encouraging all our Athletics Ireland members and fans to come along and see the action unfold and support the athletes who are competing.”

The GloHealth Senior Track and Field Championships are guaranteed to be a weekend full of excitement and adrenaline, with the highs and lows of top end competition, as Ireland's best look to become a National Champion. For the athletes, this is their one shot. Their opportunity to show that every hour of training, every bead of sweat, and every aching muscle has been worth the sacrifice. You can track their progress using the hashtag #OneShot.