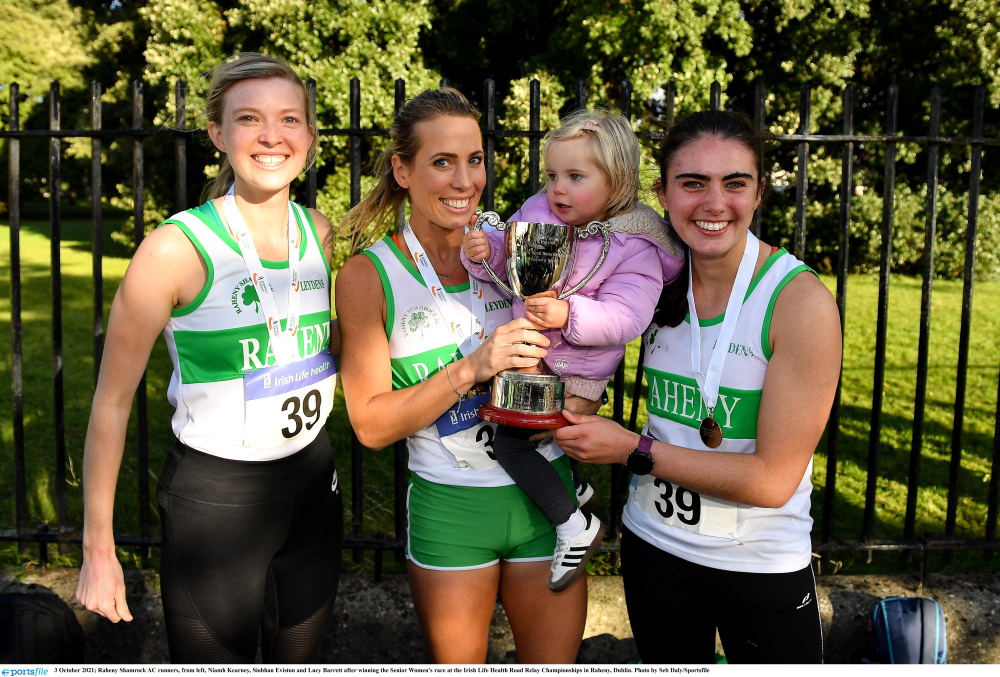 It was a thrilling spectacle once again in Raheny for the Irish Life Health National Road Relay Championships on Sunday (Oct 3rd).

The road relays once again took place in Raheny on its now familiar fast lap starting on Wades Avenue before rounding onto the Howth Road by St. Annes Park and finishing back on Wades Avenue.

Action got underway with the master’s women’s race and it was the hosts who would get the day off to a flyer, with Zoe Quinn, Kate Purcell, and Sarah Quigley all on fire as they helped Raheny to gold. had produced the good over the first two legs a masterful performance by Sarah Quigley.

The F50 competition also saw a dominate display from Raheny Shamrock which included performances from the ultra-reliable Adrienne Atkins and Annette Kealy and Patricia O’Cleirigh on their way to taking the gold ahead Brothers Pearse AC.

The men’s masters title went the way of an impressive Liffey Valley AC team which included strong performances from Ciaran Reilly, Peter Arthur and Paul Balfe. Raheny Shamrock added to their medal haul with silver while Sportsworld AC were 3rd.

Raheny Shamrock then secured their first senior women’s title in 11 years in a thrilling race. Raheny’s Siobhan Eviston made the decisive break before handing over to Niamh Kearney who extended the lead as she handed over for the final leg.

Nadia Power was in action for DCH on the final leg, but the Tokyo Olympian had too much to do to try and reel back in Lucy Barrett and ultimately had to settle for silver as Raheny went on to secure the gold.

The senior men’s team from Raheny Shamrock soon followed up their clubmates gold medal performance and were on fire in the men’s race, going on to secure their 5th title-in-a-row.

Cillian Kirwan posted a 9:16 for his opening two-mile leg and handed over to Gavin Eccles with a slender lead already secured.

Kieran Kelly powered through his leg to hand over to Daniel Stone who was in splendid isolation as he crossed the line to complete a memorable day for Raheny Shamrock AC.

Athletics Ireland would like to congratulate all of our competitors and thank Raheny Shamrock AC for hosting these championships.