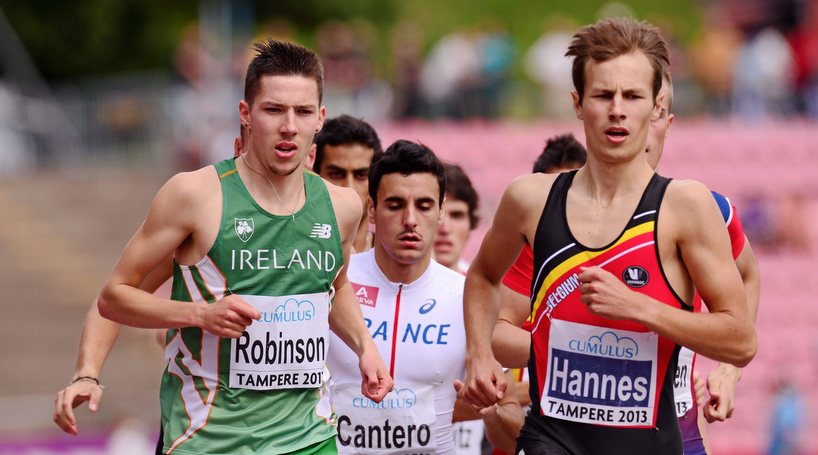 Thomas Barr (Ferrybank AC), Paul Robinson (St Coca’s AC) and Brian Gregan (Clonliffe Harriers AC) dominated their respective events on day one of the European Team Championships in Tallinn, Estonia. The victory’s along with a number of other strong Irish performances on the track puts Ireland in eight position overall with a score of 133.5 points.

Irish Record Holder Barr was pitted against home favourite Rasmus Magi of Estonia in the 400m hurdles. Barr was the stronger of the two in the home straight and stormed to victory in a time of 49.30 with Magi second in a time of 49.48. The time for Barr was his second fastest time ever for the distance, only his Irish record of 48.90 which he set in Geneva on Saturday, 14th of June is faster.

Robinson was involved in a slow tactical 1,500m race produced a stunning burst of speed over the final 100m to win the race in a time of 3.51.05. The impressive victory meant Ireland bagged another 12 points. Gregan matched his team mate with victory in the 400m in a time of 46.54. Gregan had to battle all the way for the win as Julien Wartrin of Belgium finished second in a time of 46.57.

Anne Marie McGlynn (Lifford AC) and Kerry O’Flaherty (Newcastle AC) both placed fourth in the 3,000m and 3,000m steeplechase respectively. McGlynn had a good turn of speed over the last lap to grab fourth place in a time of 9.21.19 while O’Flaherty battling all the way to finish a fine fourth in a time of 9.53.18 in the steeplechase. Tori Pena (Finn Valley AC) also finished fourth in the women’s pole vault with a clearance of 3.95m.

Rose-Ann Galligan (Newbridge AC) went with the fast early pace in the women’s 800m. Although she struggled slightly over the last 200m she still managed to hold on for fifth place in a time of 2.05.97. Another athlete placing fifth was Amy Foster (City of Lisburn AC) in the 100m in a time of 11.59 (+2.5).

Day two of the championships continues tomorrow from 11am with the likes of Mark English (UCD AC) – 800m, Fionnuala Britton (Kilcoole AC) – 5,000m and Sarah Lavin (UCD AC) – 100m Hurdles all set to star in their respective events. The Irish team will look to consolidate their eight place position in the European Team Championship 1st League. The event can be viewed live via www.irishtv.ie or on Sky channel 191