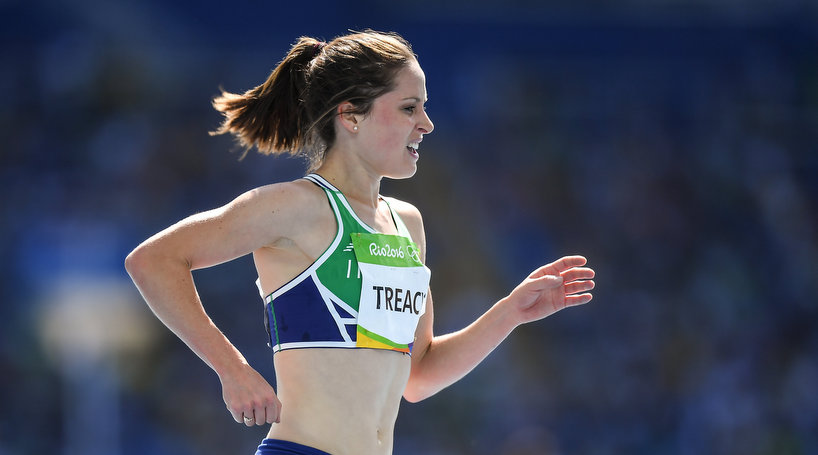 Sara Treacy (Dunboyne) put in a heroic effort in heat 3 of the women’s 3,000m steeplechase and advanced to the final on appeal after being impeded at the Olympic Games in Rio de Janeiro today (August 13).

Treacy finished 12th in heat 3 in 9:46.24 but was impeded and fell when in contention. Ethiopia’s Etenesh Diro and Jamaica’s Aisha Praught, who finished 7th and 8th in 9:34.70 and 9:35.79 respectively, also advanced to the final as a result of the collision.

The Meath woman took a heavy fall on the infield and was left bloody and shaken – but not defeated. “This is not going to define my Olympics. Get up and get going,” was the Dunboyne athlete’s response on when she fell hitting the inside of the track on the grass. Treacy had passed through the mixed zone before hearing the news of her qualification but commenting on the incident she said:

“I caught up with the back of the pack and someone just stopped and everyone ran into the back of them. I tried to avoid it and I stepped on the inside of the track. It all happened so quickly. I stood on a drainage grate on the inside of the track and fell completely. I just completely lost momentum and lost the whole pack and had to get going again.”

Treacy remained upbeat and determined afterwards. “It’s all it’s cracked up to be,” she said of the Olympics. “I’ll have to get ready for London (world championships) next year.” She need not wait that long with the women’s 3,000m steeplechase final on Monday August 15 at 11:15 Brazil time/15:15 Irish time.

Michelle Finn (Leevale) finished 11th in heat 2 in 9:49.45 and felt she could have gone faster. “I really do think overall I could have done a little. I had more left but it was a great experience.”