Donegal Athletics’ and their Choose to Challenge Campaign

Donegal athletics has recognised the need for increased promotion and supports for their female athletes throughout the county.

Donegal Athletics’ 3 main objective from the campaign are to:

The 20X20 campaign has had a huge impact on the promotion of women’s sports at the elite level throughout Ireland, but it’s time to focus on regional and club level according to Donegal Athletics.

Donegal Athletics has always been fortunate enough to have the support and leadership from female coaches, athletes and sport developers, which is why this campaign was something that came naturally to them all. A vibrant, hardworking and determined committee with women such as Anne Marie McGlynn (Letterkenny AC), Teresa McDaid (Letterkenny AC), Sharon Gallen (Lifford AC), Adriene Gallen (Lifford AC), Amanda McShane (Tir Chonaill AC), Nakita Burke (Letterkenny AC) and Helen McCready (Rosses AC), is most definitely a strong task force that will make change together !

Through her involvement in the Forerunners programme and the Donegal Sports Partnership women in sport programme, Natasha Kelly was encouraged and eager to strengthen the membership of Donegal Athletics and identified those who would be more than capable of leading.

Speaking on some of her experiences in athletics, Natasha Kelly, an athlete herself with FinnValley AC has said:

“I’ve often turned up to events and races and been the only women there, so I just race the men! It can be extremely daunting and intimidating and I can see why it would and does turn women away. There is not enough promotion or emphasis on women’s categories at such events.”

Natasha who works as a schools development officer and also a very active member of FinnValley AC youth coaching team says from “observing and being in that environment, it’s shocking the drop out rate of females”.

This project has already had a huge impact and is warmly welcomed by clubs, coaches and athletes throughout the county.

Natasha said the project came about after the Donegal 5km road championships in 2020.

“I read the race report and noticed that the report covered the men’s race in great detail accompanied with a picture of the top 3, but only mentioned the first lady!”

As the campaign says :“If she can’t see it she can’t be it: so how do we expect young girls to have someone to aspire to!”

“I think that in this day in age, it’s time for change. Women train, compete and work just as hard as men. Biologically at the high end of the spectrum, we may not be a strong and as powerful as our male counterparts, but we do push ourselves and we do and want to get the best out of ourselves.

“I want to show young girls, teenagers and women that physical activity and sports is not just for the “Elite” or to “Race”. Personally, sport is far more than that, its friendships, its opportunities and in a way it allows me to express myself.

“I’ve meet some of my closest friends through sports, I’ve met some of the most inspirational people through sport, I have gotten to travel and have had some of the most fun and memorable days out with my school, club and family. Sport is a release for many and I want to be able to share my passion and enthusiasm and help as many people as possible along the way. 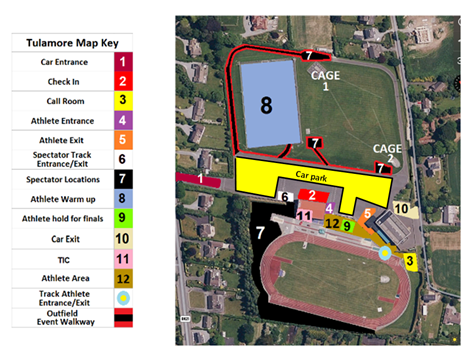 Natasha Sharing a special moment, with her mother Carmel after her cross country team won the Senior County Championship in 2019

“Women and kids’ health is something that I am hugely passionate about and I’m currently finishing up a masters in health promotion through Sligo IT. I’m focusing on kids health with a project looking at ways to retain young females in physical activity.”