Marcus Lawler has been selected for Team Europe

Team Europe and Team USA have announced their respective squads ahead of the historic head-to-head duel The Match, which will be held in Minsk, Belarus on 9-10 September. 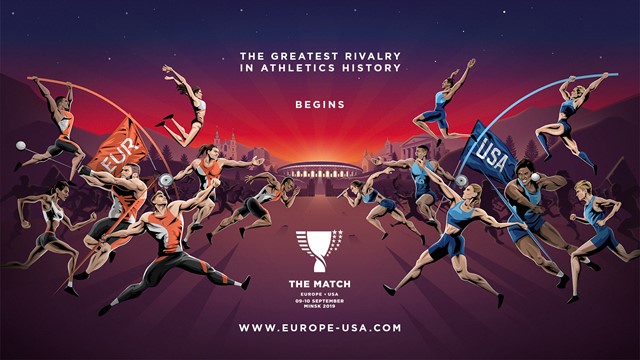 Marus Lawler (200m) has been selected as the sole Irish representitive.

The Match will be the last major athletics meeting before this year’s World Championships and will take place in the Dinamo National Olympic Stadium in the Belarusian capital. The stadium was fully refurbished in 2018 and seats 22,000 spectators. It was packed close to capacity for the inauguration of Dynamic New Athletics during the European Games in June.

Host country Belarus has been guaranteed at least 10 places in Team Europe and their domestic presence includes Herman in the 100m hurdles as well as reigning world U20 champion Karyna Taranda and European silver medallist Maksim Nedasekau in the high jump and former European champion Tatsiana Khaladovich in the javelin.

The standout names on the American squad include reigning Olympic champions Michelle Carter and Brianna McNeal as well as multiple global title winners Allyson Felix and Brittney Reese. Felix will be contesting the 400m in Minsk, the distance over which she was crowned world champion in 2015.

The American men's team has a host of recently minted US champions who will be on their way to the forthcoming IAAF World Championships in Doha including Craig Engels, Hillary Bor, Jeron Robinson, Sam Mattis and Conor McCulloch.

Eurovision Sport, who have secured the broadcast rights, will ensure wide free-to-air coverage of The Match across Europe. The Match will also be broadcast live on NBCSN and NBC Sports Gold in the U.S.