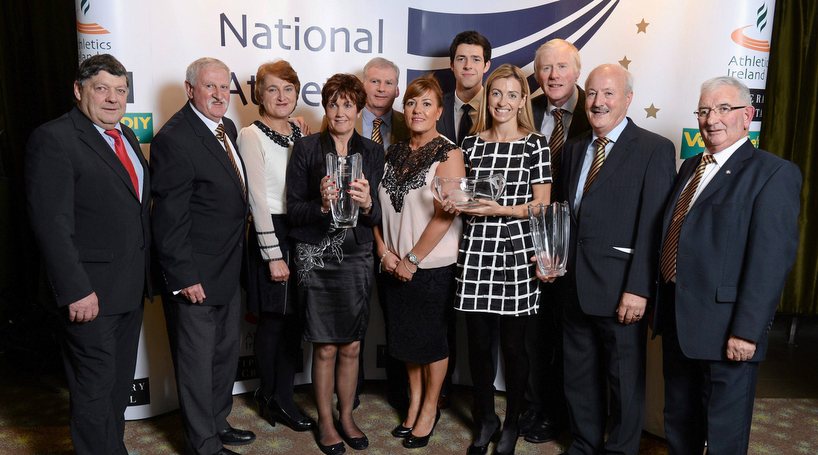 Athletics Ireland is pleased to announce the nominations for the 2014 National Athletics Awards in association with GloHealth and Emerald Crystal. The awards will take place on Wednesday 26th of November from 12.00-3.30pm in the Crowne Plaza Hotel, Northwood. The awards ceremony is a celebration of the many successes of our athletes during 2014. The award ceremony also commemorates our exceptional volunteer base who are the bedrock of our sport. Tickets for the ceremony are available to purchase now:

Endurance Athlete of the Year nominations includes; Mick Clohissey (Raheny Shamrock AC) winner of the national half marathon, 10,000m national track title and the Inter Club Cross Country Titles. Fionnuala Britton (Kilcoole AC) for placing eight in the 10,000m and tenth in her marathon debut at the European Athletics Championships, Brendan Boyce (Letterkenny AC) for placing 16th and setting a new personal best time of 3:51.32 in the 50km Walk at the European Athletics Championships and Paul Pollock (Annadale Striders AC) for setting a personal best of 1:02.09 for 30th place and fifth European at the IAAF World Half Marathon Championships.

The following are the nominations for the Emerging Athlete of the Year; Phil Healy (Bandon AC) and Sarah Lavin (UCD AC) for setting new personal bests in their respective events and qualifying for the European Senior Athletics Championships in their first year out of the junior rankings. Both athletes were members of the Irish 4x100m team that set a new Irish Record of 43.84 at the European Athletics Championships. Ciara Mageean (UCD AC) for securing the national 1500m title in her first race back after injury and for placing third in a high quality Fifth Avenue Mile Race in New York. Christine McMahon (Ballymena and Antrim AC) for significantly lowering her personal best in the 400m Hurdles to 56.97 and qualifying for the semi-finals at the European Athletics Championships.

The People’s Choice Award is an exciting new awards category this year, full details on the nominees and the voting options will be available on Wednesday 15th of October. Following on from this the 2014 Hall of Fame Inductee will be revealed on the 22nd of October.

The prestigious Athlete of the Year Award will be presented on the day.

The award ceremony also commemorates our exceptional volunteer base. In recognition of that, awards will be presented to Outstanding Coach Award and the Lifetime Achievement Award.

The ceremony will once again take the format of an Awards Luncheon. Please join us in celebrating and congratulating the awards winners. The lunch will take place from 12.30pm to 3.30pm. Please note: There is a limited amount of tickets available for purchase; the deadline for purchase of tickets is Friday 7th of November. The cost of the tickets is €50 per head and the dress code is smart. Tables of 10 can be purchased at €450. To purchase tickets please telephone: (01) 8869933 or book online HERE