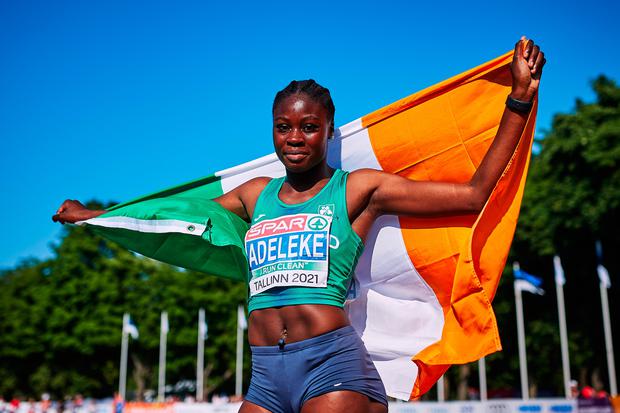 Athletics Ireland would like to wish Rhasidat Adeleke the best of luck in the final of the European Athletics 'Rising Star' Award.

The award is to be announced on #GoldenTracks live via European Athletics YouTube channel from 8.30pm this evening.

The shortlist was determined by a four-part voting process which incorporates votes from fans across social media, Member Federations, media and an expert European Athletics panel. Each section constituted 25 percent of the vote.

The last winners of the Rising Star award in 2019 were Ukraine’s Yaroslava Mahuchikh and Niklas Kaul from Germany.

Now based in the United States at the University of Texas in Austin, Rhasidat Adeleke crowned her season by winning a 100/200m double at the European Athletics U20 Championships in Tallinn

Adeleke became the first female sprinter to complete the sprint double at this championships in a decade. The Irishwoman won the 100m by a narrow margin in 11.34 before dominating the 200m, crossing the finish-line in 22.90 to win by a yawning gap of 0.65. Adeleke’s winning time only just missed the championship record of 22.85 set by the soon-to-be two-time Olympic 200m champion Barbel Eckert in 1973.

Her sixth race of the championships was every bit as impressive. Adeleke demonstrated her versatility by blasting to a 52.54 split in the 4x400m final - the fastest leg of the final - to anchor the Irish team home to fifth.