I started running with Glounthaune AC when I was 8 years old. Like today, with Carraig na bhFear we had great fun at cross country & track events…...after the race! Seánna Boyle, a current Carraig na bhFear member was one of my teammates, so as you can see, we have been friends for a long time.

I won two All-Ireland medals as a juvenile (U12 &U13) as a member of the Cork teams but didn’t compete after U15 as I had no team and to be honest, I found it hard going on my own.

See photograph below from the 1985 County XC, 3rd from the left is Noreen’s daughter Carol. 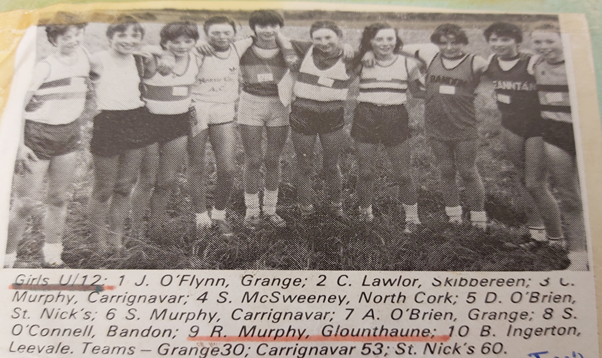 I joined the UCC athletic club in 1992, and now as part of a team again, I was back battling through the muck trying to secure those most important team places. We travelled the country competing in Intervarsity, County, Munster and National competitions - we had a fantastic time -lots of stories to be told but not for now! In 1993, the UCC athletics team made history when we won all four Intervarsity Competitions (Cross Country, Indoors, Track & Road Relays) in the one year. This was a fantastic achievement for UCC as we were competing against very strong Dublin University teams. Photo below was taken after the UCC women’s team won the outdoor track intervarsity’s competition for the first time. 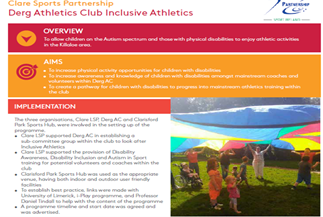 A photo below from 2002 Munster XC championships where you see another two current Carraig na bhFear athletes. 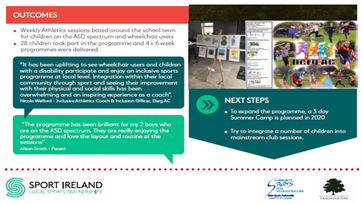 In case you are wondering at this stage if I was the eternal student, it was possible to continue running with UCC after college, but we were not eligible to run in the Intervarsity competition. However, all good things must come to an end and with work commitments etc.  separating the team from Cork, in 2005, I joined Eagle AC.

Again, for me, the main thing was having a team. In 2008, Eagle’s women’s team won the clubs first ever Senior XC team medal and the fact that it was gold was a huge achievement. We held on to that title in 2009 and 2010! On a personal level, I took my first ever individual gold county medal in 2008 when I won the County Seniors XC which was hosted by Carraig na bhFear. Other team highlights included bronze in the National Senior Road relays (2009) and bronze in the National Masters XC (2010) where I finished second on the same day. 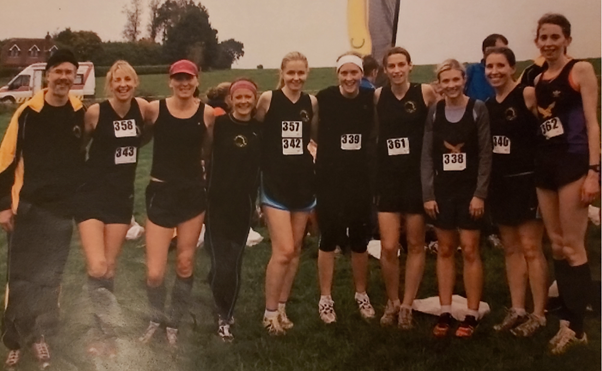 In 2010, I had the honour of representing Ireland as a member of the O35 Masters XC Team. Ireland won Gold on that day! It was a day to remember. 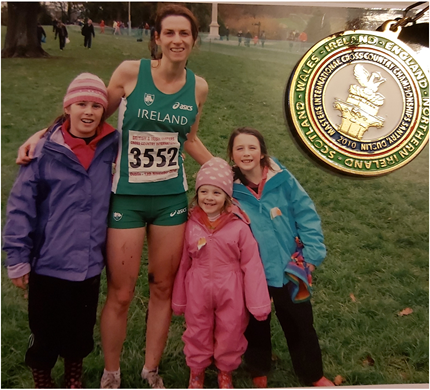 It was after this, with my daughters getting older and I suppose trying to keep a work/life balance that I pulled back from the competitions.

My daughters Molly and Clíona were at this stage members of Sarsfields camogie club so I started helping out coaching the U6’s, even thought I had never played camogie myself but the club at the time were short coaches. It was only when my youngest daughter Lucy showed an interest in athletics and after a bit of encouragement from Eamonn Fitzgerald, even though I told him I really didn’t have the time to fit everything in, that we joined Carraig na bhFear AC. It was never my intention to coach in the club, I was planning on getting a run in while Lucy trained, but slowly I found myself getting involved.

Let’s be honest, it is so easy to say that we are too busy to help but the way I look at it, I got so much enjoyment from athletics myself and I am so grateful for the time my Dad (Lifetime Coach), Ray Shanahan (UCC) and Liam Doherty (Eagle) gave me over the years that I feel that it is now my turn to give back. Our club President, Noreen is another person who has given a lifetime to athletics and is still out there on those cold, wet, dark nights encouraging club athletes as they grind it out in the muck at training.

As a mother of three daughters’, I feel it’s important to lead by example - why should I expect someone else to coach women if I am not willing to do so myself. I really enjoy coaching, seeing an athlete progress or even seeing an athlete smile after training even though they felt a few minutes earlier that they were going to die, makes it worthwhile. It’s not all about winning, it’s about being part of a team, meeting people, having fun and being active. I know I said earlier that my competition days were over but when Noreen and Ger Foley said one night ‘If you ran, we would have a team’, I was in! In 2019, Carraig na bhFear won the club’s first Senior Women’s’ Cross Country team medal when we took bronze. 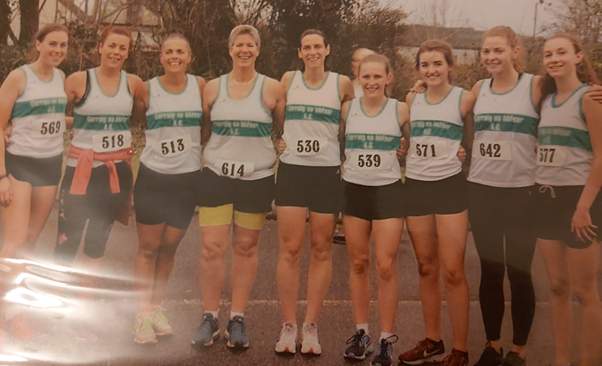 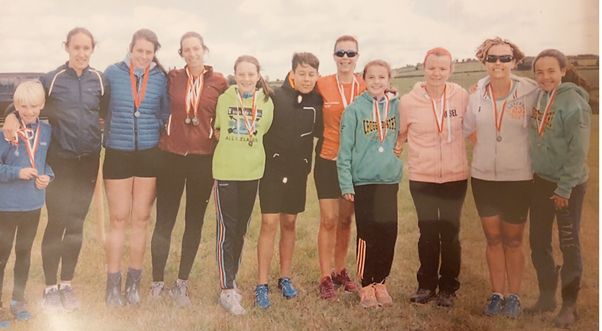