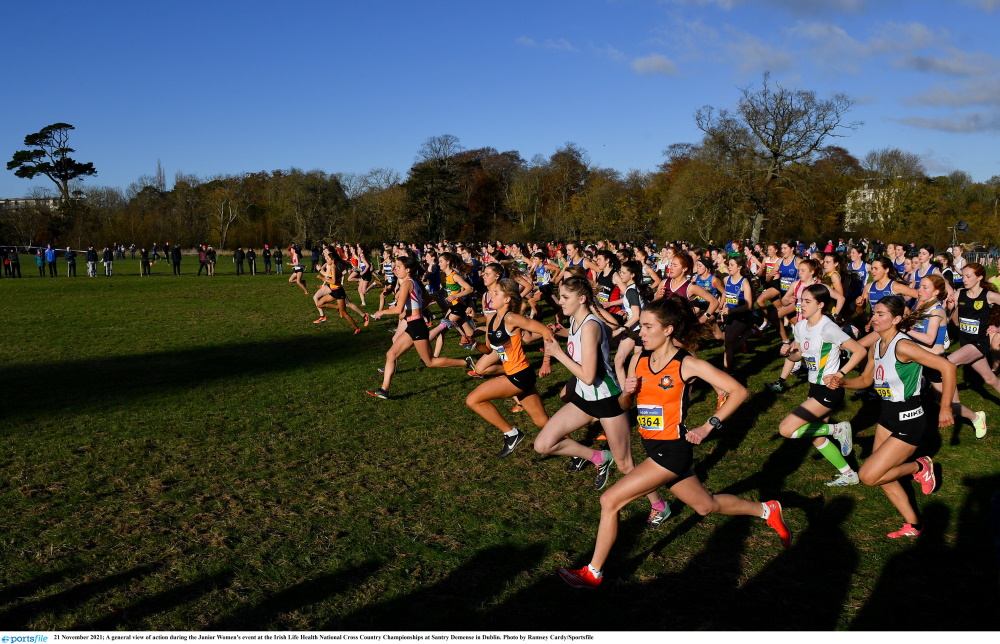 It was a day to remember for all in attendance at a sunswept Santry Demesne for Irish Life Health National Cross Country Championships (November 21).

Olympian Michelle Finn shone on a day of athletics competition which was glittered with star names throughout. The Leevale AC athlete posted a career best performance to claim the senior women’s title in a superb front running display.

As impressive a performance was that of Hiko Tonosa (Dundrum South Dublin) who powered away to take the senior men’s race in style, adding to his 5,000m and 10,000m track titles from earlier in the year.

The women’s senior race was stacked with talent and Finn made her mind up from the gun to lead out and she continued to pour on the pressure from the front throughout, showing all of her big race experience as she clocked off each lap of the 8,000m distance.

The double Olympian would cross the line in 27.22 from Sarah Healy (UCD AC) in 27.34 and Roisin Flanagan (Finn Valley AC) in 27.41, all of whom secured selection on the European Cross Country team set to compete in Fingal-Dublin on December 12th.

The depth and class on show was there for all to see and familiar names in contention included Aoife Cooke (Eagle AC), Mary Mulhare (Portlaoise AC), Ciara Mageean (City of Lisburn), Aoibhe Richardon (Kilkenny City Harriers AC), and Annmarie McGlynn who would lead Letterkenny AC to the team title from Leevale (Silver) and Raheny Shamrock (Bronze).

Sarah Healy would also collect the U23 gold medal, with Aoife O’Cuill (St Coca’s AC) claiming silver in 28.33, and Danielle Donegan (UCD AC) taking the bronze in 28.59. O’Cuill and Donegan will now join Healy in honing their preparations for a tilt at European cross country competition.

In the U20 women’s 4,000m race, recent U20 Autumn Open Cross Country winner, Jane Buckley (Leevale AC), continued her fine form to secure the junior title in impressive style to cross in 14.06. Buckley was pushed all the way by Emma McEvoy (Dundrum South Dublin) and Rebecca Rossiter (Loughview AC) who both crossed the line within 6 seconds of the Leevale athlete.

The performances from McEvoy and Rossiter would also secure U18 gold and silver medals respectively, while Roise Roberts (North Belfast Harriers) completed the podium with a brilliant 14:39.

The last race of the day was the senior men’s 10,000m and there was a healthy leading pack for the first half of the race until the classy Hiko Tonosa (Dundrum South Dublin) and the prolific Darragh McElhinney (UCD AC) set to battle it out over the final 2 tactical laps of the 10,000m course.

Paul O’Donnell (Dundrum South Dublin) never looked out of contention and would finish third in an impressive 30.47, but it was Tonosa and McElhinney who would ultimately round the final bend together.

It was Tonosa though who managed to offer up the decisive final kick to complete a remarkable journey which will now see him take on the elite of Europe at the European Cross Country Championships in just three weeks time. He crossed in a time of 30.32.

With two on the podium, it was no surprise to see club honours go the way of Dundrum South Dublin for a stunning team performance. Clonliffe Harriers AC claimed the team silver medal, while Leevale collected yet another team medal for bronze.

Darragh McElhinney lost nothing in defeat and collected his U23 gold medal for his 30.35 performance as he too now turns his attention to Fingal-Dublin 2021. Joining McElhinney on the U23 podium were an ecstatic Keelan Kilrehill (Moyvalley AC) in 30:59 and Thomas McStay (Galway City Harriers).

The men’s U20 race was another to live up to its billing. European U20 gold medallist Nicholas Griggs (Mid Ulster A.C.) continued his sensational season in taking the gold medal in 18:14.

Griggs was pushed all the way by Ennis Track star Dean Casey who stayed on the shoulder of the Mid Ulster AC athlete throughout, finishing in 18.17. Scott Fagan (Metro/St. Brigid's A.C.) produced an outstanding performance after a long injury layoff to claim 3rd in 18:33 and will form part of a very strong looking European U20 cross country team.

Sixteen-year-old Griggs also walked away with the U18 title and was joined on the podium by the eye-catching pair of Harry Colbert (Waterford AC) who took silver and Niall Murphy (Ennis Track AC) bronze.

There was also no shortage of drama earlier in the day. Lucy Foster (Willowfield Harriers) followed up her form at the SIAB to claim gold in the U16 race and looks sure to follow in the footsteps of sister Kirsty. Lorraine O’Connor (Donore Harriers) and Clodagh Gill (Moyvalley AC) looked ones to watch for the future and claimed the silver and bronze.

Sean Cronin (Clonliffe Harriers AC) enjoyed every moment of his U16 winning performance on home soil and was greeted by rapturous applause as he crossed to claim gold ahead of Darragh Mulronney of Moy Valley AC in second and Padraig Corduff of Westport AC in third.

The U14 girls title went the way of Emily Bolton from Donore Harriers who backed up her 2019 national cross country title with another brilliant display which saw her pull away from the field. The U12 girls race provided one of the highlights of the day with Westport AC twins Freya and Holly Renton inseparable throughout the race, eventiually resulting in both athletes dipping for the line in a dramatic finish which saw Freya take the gold.

The U14 boys race was also a thriller and finished with Declan O’Connell coming out on top for Craughwell AC who finished with an impressive 3 athletes in the top 12, while Ethan Bramihill (Greystones and District A.C.) is the new U12 champion, dipping below 7 minutes for 2,000m.

Today’s action has further whetted the appetite for the upcoming European Championships and attention will now turn to those all-important selections which are due to be announced in the coming days.