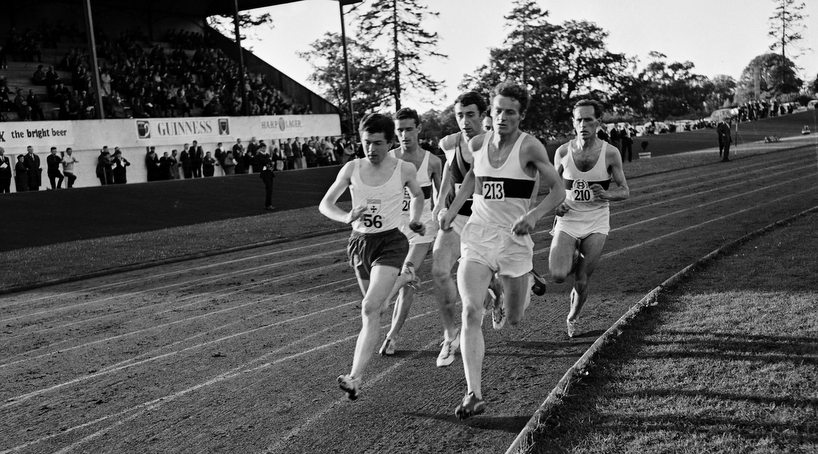 Frank Murphy of Clonliffe Harriers will be inducted into the Hall of Fame in 2014 at the National Athletics Awards on the 26th of November. The Hall of Fame award is presented to an athlete who has achieved to the highest level and is considered world class. The recipients have transcended the sport and are sporting legends. Murphy duly takes his place in the Hall of Fame joining fellow Irish greats Ronnie Delany, Eamonn Coghlan and John Treacy.

It is especially appropriate that Frank Murphy is inducted into the Hall of Fame in 2014, as it is the 45th anniversary of his greatest International success winning the silver medal in the 1500m Final at the 1969 European Athletics Championships in Athens in a time of 3.39.51, a new Irish Record. Murphy’s success continued on the International stage when he claimed another silver medal; this time at the 1970 European Indoor Athletics Championships in Vienna over 1500m in a time of 3.49.0.

In 1968 he became an Olympian representing Ireland at the Mexico Olympics in the 1500m, four years later he represented Ireland again at the 1972 Olympics in Munich over 800m and 1500m. He was also crowned national 1500m champion in 1969; his formidable record over the classic mile and metric mile distances makes Murphy an Irish middle distance running legend.

Despite all the international success Murphy always stayed true to his roots competing for his club Clonliffe Harriers at national cross country and track and field championships. In the first ever Morton Mile organised by Clonliffe Harriers he placed second to the great Kenyan athlete Kip Keino in a time of 3.59.3. He ran his mile personal best of 3.58.6 in 1968 becoming Ireland’s fourth fastest ever at the time. Murphy won back to back National Mile Titles in 1966 and 1967.

Murphy first rose to prominence in 1963 when he won bronze in the National Junior Cross Country Championships; he was also a multiple Irish Schools Champion. His first senior cap came in the summer of 1966 in an International match against England and Wales.  He attended Villanova University on scholarship winning the prestigious NCAA Indoor Title over 880yards in 1969; other highlights of his university career included numerous successes with his college team at the world famous Penn Relays.

The ceremony will once again take the format of an Awards Luncheon at the Crowne Plaza Hotel, Santry. Please join us in celebrating and congratulating the awards winners. The lunch will take place from 12.30pm to 3.30pm. Please note: There is a limited amount of tickets available for purchase; the deadline for purchase of tickets is Friday 7th of November. The cost of the tickets is €50 per head and the dress code is smart. Tables of 10 can be purchased at €450. To purchase tickets please telephone: (01) 8869933 or ONLINE