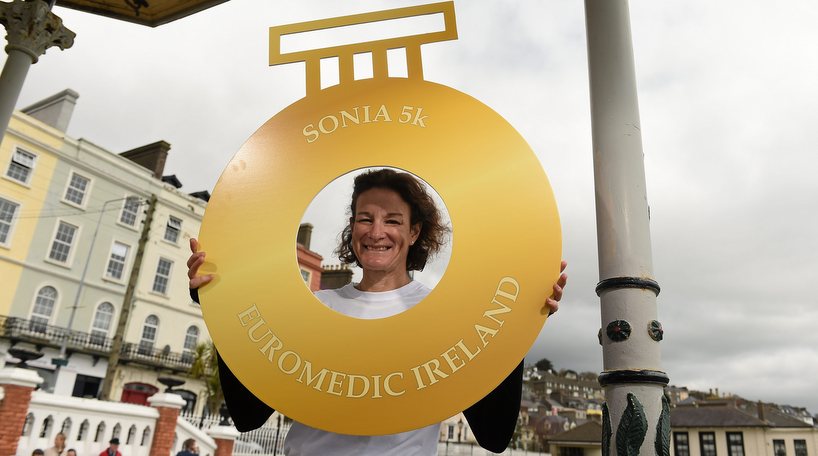 The event organised by Athletics Ireland marked the 20th Anniversary of Irish athletics icon Sonia O’Sullivan’s historic victory in the 5,000 metres at the IAAF World Championships in Gothenburg in 1995.

The Sonia 5K gave participants a rare opportunity to join the former World Champion and Olympic Silver Medallist in this Special Celebration Event on a beautiful scenic route around her hometown. The race started outside her old secondary school, Cobh Community College, and finished in the center of the town along the promenade in perfect conditions.

Kenyan Ian Kiprono was first to break the tape in a time of 16:17, he was followed home by Michael Bruton in second in 16:20 with Peter Hanrahan (Togher) third in 16:31.

There was a fantastic women’s race with Amy Rose Farrell (Blackrock) travelling from Dublin to win in 17:10 ahead of Sophie O’Sullivan (Ballymore Cobh) who was second in 17:25. Carly Cooke (UCC AC) was third in 18:23.

All finishers received a Unique Commemorative Medal - an exact replica of the World Championship Gold Medal won by Sonia O’Sullivan in Gothenburg in 1995 when she became Ireland’s first-ever female Athletics World Champion.

There was also a highly successful Sonia mile challenge for the kids which kicked off the event with hundreds of children competing on the track where her athletics journey began.

Sonia O’Sullivan said:  “It was a brilliant occasion to come full circle from Gothenburg and celebrate with the people of Cobh. It was great to be able to be able to run in my hometown and mix with all the runners. It was really encouraging to see the hundreds of young runners in the kids’ mile. The atmosphere was fantastic and it was great to share it with people who love running as much as I do.”

CEO of Euromedic Ireland, Tom Finn, was equally pleased with the successful event. “It was great to be part of this fantastic event and I cannot think of a more fitting way to honour the achievements of Sonia O’Sullivan than in her hometown,” said Finn. It was great to bring the journey of her world gold full circle in front of her family, friends and local community. Congratulations to Athletics Ireland on conceiving the idea and to all who took part in this fabulous run.  Euromedic is delighted to the support the Sonia 5k”

John Foley, CEO Athletics Ireland said: “We were honoured to be able to mark Sonia O’Sullivan’s crowning achievement on the track.”

Full results are on www.precisiontiming.net