There were some impressive individual results which were key to Kildare County’s winning total.

Several high placings in other events proved vital on a competitive day of action which saw Dundrum South Dublin A.C. secure second place, led out by Kate Doherty who got DSD up and running with a win in the 100m hurdles in 13.75 before going on to secure maximum points in the 200m in the afternoon.

Clonliffe Harriers are the men’s champions thanks to a dominant display across the course of the day which included a sprint double from Olympian Marcus Lawler who took full points in the men’s 100- and 200-meter races.

Rolus Olusa also doubled up with a winning performance in the Pole Vault and Triple Jump to give the Dublin club a strong footing heading into the afternoon’s action.

In all Clonliffe won 8 events with great performances from Simon Galligan in the Hammer (59.94m), Keith Marks in the Long Jump (7.07m), Eoin Sheridan in the Discus (52.07), and a leading performance from Stephen Rice in the Javelin (70.63).

There was a great battle for second and third with Raheny Shamrock A.C. just edging out Dundrum South Dublin A.C. Cillian Kirwin’s winning performances in the 1500 and 800m proved to be the difference in helping Raheny secure the second place finish. 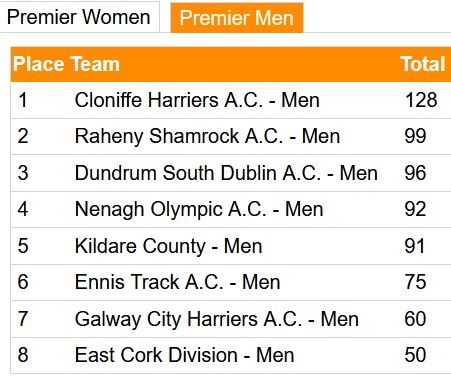