Killarney Valley AC, A story of Innovation, Rebirth and Ambition

Killarney Valley AC made the National Headlines in November 2020 for the achievement of completing the build of its Innovative new home “The Killarney Valley AC Arena”. The clubs new home was described by the Irish Times as “A Jewel in the Kingdoms Crown” , while some other references to the facility when the initial  pictures were viewed referred to it as “ An Oasis of Athletics”.  One local publication referred to it as a “Beacon of Light & Hope” considering that the club completed the build and opened its doors in the teeth of the pandemic. 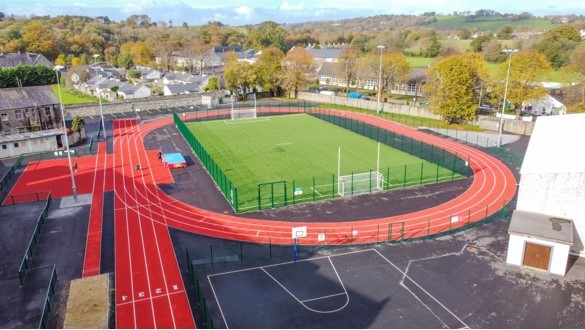 Killarney Valley AC and its brave Athletes, Coaches and Committee members have a history in our great sport of Athletics  that goes back over 50 Years, into the early 1970s. For most of that time the Club was known as Spa Muckross Ac.  In the guise of Spa Muckross the club developed 1000s of athletes through the decades , some of whom went on to great things in our sport and other sporting activities , one World Medalist , many National Medallists and some international Vests were acquired by athletes who had started out with Spa Muckross but moved into other clubs in later teenage years or were lost to other sports in Kerry. On a walk through the Killarney streets it is possible to hear All Ireland Football medals jangling in the pockets of former Spa Muckross Ac members, to put it simply without a home Spa Muckross AC found it difficult to compete and retain its athletes beyond teenage years.
Thereby the vision was born in 2012 to build a track, the vision fuelled with passion for the sport of Athletics. Step one took place in 2015 when the club decided to firmly place its footprint amongst the various sports in Killarney town. Starting with a new club name , having “Killarney”  town called out in the name  demonstrating that the club did not have any parish type boundary was important , but also “Valley” given the towns position in a huge geography showing all are welcome. Next step was to acquire some land which the club did by partnering with the St. Brendan’s Trust which owns the school lands in Killarney. A lease was agreed and fund raising started. Years of many challenges in grant aid , fund raising and construction along the way , but like any group or person whose roots are deep in athletics , resilience and persistence key attributes , our “Oasis of Athletics” was lit up in November 2020.

The Future is bright for Athletics in Killarney, future ambition for the club is to have a men’s & women’s team in the National League within the next 2 years, thereby creating a visible pathway for our juvenile members. This a crucial step for the club, especially in Killarney where the “Tribal” aspect of other sports has been a key their success. For example Killarney Basketball teams have won National Senior Cups and leagues through the decades, Killarney Soccer has been to National Finals , local schools have won national titles in all these sports and most famously GAA, so why not Killarney Athletics?. The goal for Killarney Valley AC is to  “flip the script” so as to speak, by not being a nursery for other sports and their success , but to be an inclusive and safe club and venue for people of all abilities , creeds & genders where participation and ambition are welcome in equal measures. Current Club Athletes both High Jumpers Jordan Lee and Ciara Kennelly paving the way in many respects wearing the Killarney Valley vest and Irish vests on National and International Stages. 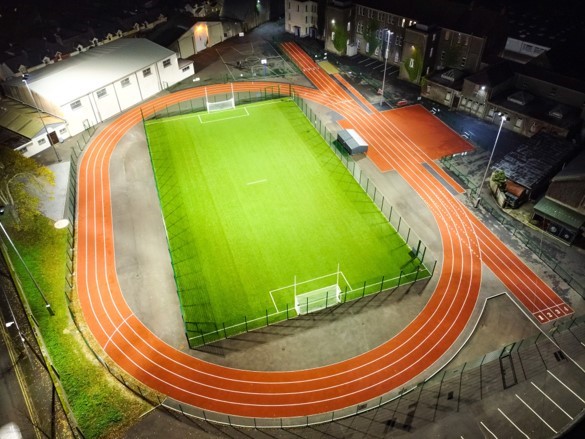 “An Oasis of Athletics” , the definition of “An Oasis” is “A fertile Spot in a Desert”. In Killarney a town where the economy and well-being of the community is so dependent on tourism, the covid pandemic hit us hard , however this felt a little less when the  club was able to facilitate training in the new facility  for Juvenile members in November and December while in level 3 restrictions. This pandemic will end, the lights will remain switched on and the fires of Track & Field will burn bright in the Valleys of Killarney for generations to come.