National records fall on day 4 of European U20 Championships

National records fell on the 4th and final day of the European U20 Championships in Tallinn today, with Diarmuid O'Connor (Decathlon) and the Irish Women’s 4 x 400m relay team rounding off Ireland’s most successful ever championships in fitting style.

McCourt and Cronin safely transitioned the baton to O’Neill for the third leg which saw the Doheny athlete move from 8th place to 7th before making the final handover to Adeleke who had a substantial gap to make up to the leading five athletes.

True to form Adeleke clocked a 52.54-second final leg (fastest of anyone in the field) to help the Irish women to fifth and the new U20 NR.

Relay team success is very much about the squad and a special mention must go Kate O'Connell (Lucan Harriers) and Blanaid Fogarty (Enniscorthy AC) who played their part and were there to roar their teammates home.

Diarmuid O'Connor (Bandon AC) put together a breath-taking series of performances in the Men’s Decathlon over the last two days to secure a 4th place finish in a new national U20 record score of 7604 points.

The 1500m is one of O’Connor’s stronger events and the Bandon athlete went out in from the gun and gave his all to cross the line in 4:31.63 to round out a stunning two days of competition. It resulted in O’Connor finishing in an agonising 4th place overall on the back of 8 PBs from his 10 events.

The final score of 7604 points set the new Irish U20 record in style, taking over from the record of Barry Walsh which had stood since 1987.

Aoife McGreevy (Lagan Valley AC) & Laura Mooney (Tullamore Harriers) were also in action this afternoon in the Women’s 5000m split final which would see the A and B final times amalgamated. The Irish duo went in final A which was by the quicker of the two.

Mooney finished in a brilliant 6th place overall having gone with the leading pack from the gun. The Tullamore Harriers athlete was still in touch with two laps to go but an injection of pace in searing heat saw a gap open to the podium places. Mooney crossed the line in a 16:41.87 to claim yet another top 10 placing for the Irish at these championships.

McGreevy raced patiently to the rear of the main pack and was unlucky to just miss out on a top 20 finish, crossing in 17:20.49 for 22nd place overall.

The Men’s 4 x 100m Relay team were out on track early this morning. The team of Cillian Griffin (Tralee AC), Israel Olatunde (UCD AC), Charles Okafor (Mullingar Harriers), and Adam Sykes (Orangegrove AC) finished in a time of 41.06 for 6th place in the heats. It was a smooth run by all and offered more championship experience for the young sprinters, but ultimately it was not enough to advance to the evening’s final.

These championships will be remembered for some time to come, and credit must go to all those who have helped to support the athletes in getting to this stage over the last number of years. Team Ireland will return to Dublin with 4 gold medals, a national senior record, several national U20 records, as well as another six top-6 placings. 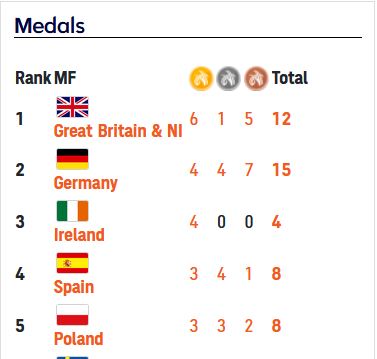