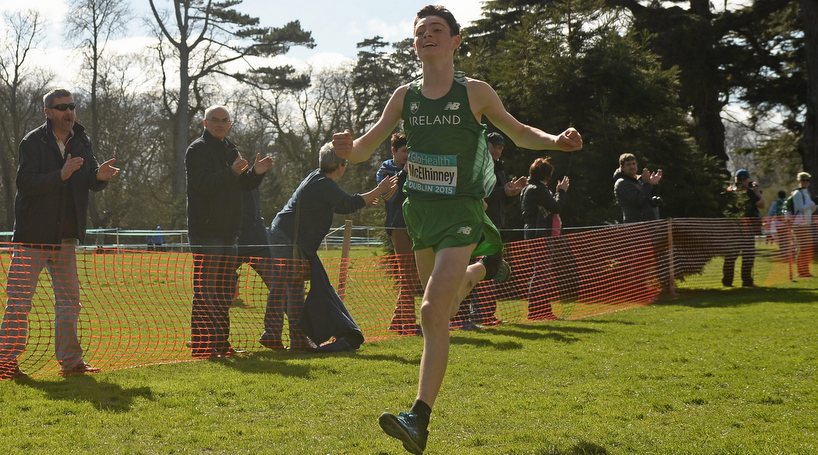 Darragh McElhinney (Colaiste Pobail Bheanntrai) was the big story of the SIAB schools international cross country held in Santry Demense on Saturday, 21st of March. The 32 strong Irish schools team competed against athletes from England, Scotland and Wales in the junior and intermediate age categories.

McElhinney won the junior boy’s race in emphatic fashion setting a testing pace from the start of the 3,5000m contest. McElhinney was up against strong athletes from England and Wales as the leading pack headed out around the famous cross country loop in Santry Demesne. McElhinney proved the strongest as he romped to victory in a time of 12.52. Jack Moran (Colaiste Mhuire Mullingar) and Fathi Aden (Synge Street CBS) produced strong performance to finish ninth and tenth respectively. The top placings meant the junior boys’ team finished second in the team event behind England.

Sarah Healy (Holy Child Killiney) was another impressing in the glorious sunshine in Santry. Healy the reigning All Ireland champion battled all the way to a fourth place finish with the top three spots filled by athletes from England. Olivia Nelson (Strathearn, Belfast) finished in tenth place with Ireland placing third overall in the team event won by England.

James Edgar (Friends School Lisburn) proved best of the Irish athletes in the intermediate boy’s race as he finished in sixth place in a high class field. The Irish team packed well to finish second in the team category on 73 points behind the all-conquering English team on 22 points.

Reigning junior champion Caoimhe Harrington (Colaiste Pobail Bheanntrai) stepped up to the intermediate category to lead the Irish home with an eleventh place finish. It was an encouraging performance by Harrington when you consider she has another year in this category. The Irish team placed third in the team standing with a score of 109 points.