Athletics Ireland is delighted to announce details and open registration for the forthcoming Sprints / Jumps / Hurdles Network day which will be held in Athlone IT on Saturday June 23rd.

A presentation on long-term athlete development (LTAD) by Dr Philip Kearney, in-season planning and components of the sport will be offered alongside practical workshops on sprints, long and triple jump, and high jump.

Registration is now open for an event not to be missed by all performance and developing coaches in Ireland.

Early booking is advised as this event is likely to sell out fast.

Course Timetable can be found HERE

John worked as a teacher for 38 years in St David’s Artane where he began his coaching career. He has coached many events including all sprints, hurdles, jumps, including Pole Vault. He was national event coach for High jump and Long Jump in the 1980’s and 1990’s. He currently coaches a strong stable of 400m athletes including Brian Gregan, Paul Murphy, Nick Ennis, Jamie Pender, Dara Kervick, Harry Purcell and Ciara McCallion. He, also, coaches jumpers and combined eventers Barry Pender, Keith Marks, Eamonn Fahey, Shannon Sheehy, Shane Aston among others.

Femi is a former International Triple Jumper with a PB of 16.63m and current England Athletics Coach Mentor for Jumps. As assistant coach to Aston Moore he helped heptathlete Louise Hazel win Commonwealth gold and was also technical advisor to Phillips Idowu before his retirement.

Phil works in the Physical Education and Sport Sciences Department at the University of Limerick, having previously spent eight years lecturing in skill acquisition at the University of Chichester, UK. Phil was also the programme coordinator for the BSc Sport Science & Coaching at Chichester. Inspired by his coaching at a local athletics club, Phil’s research focuses on the development of youth track and field athletes, and was recently featured on RTÉ Brainstorm. Phil is also a co-founder of Movement & Skill Acquisition Ireland.

Barry Pender is an Irish athlete/coach whom has built up a wealth of knowledge having worked under coaches such as John Shields, Fuzz Caan and Sharon and Gareth Lease. He has a personal best of 2.26m and has won:

He has also competed at: 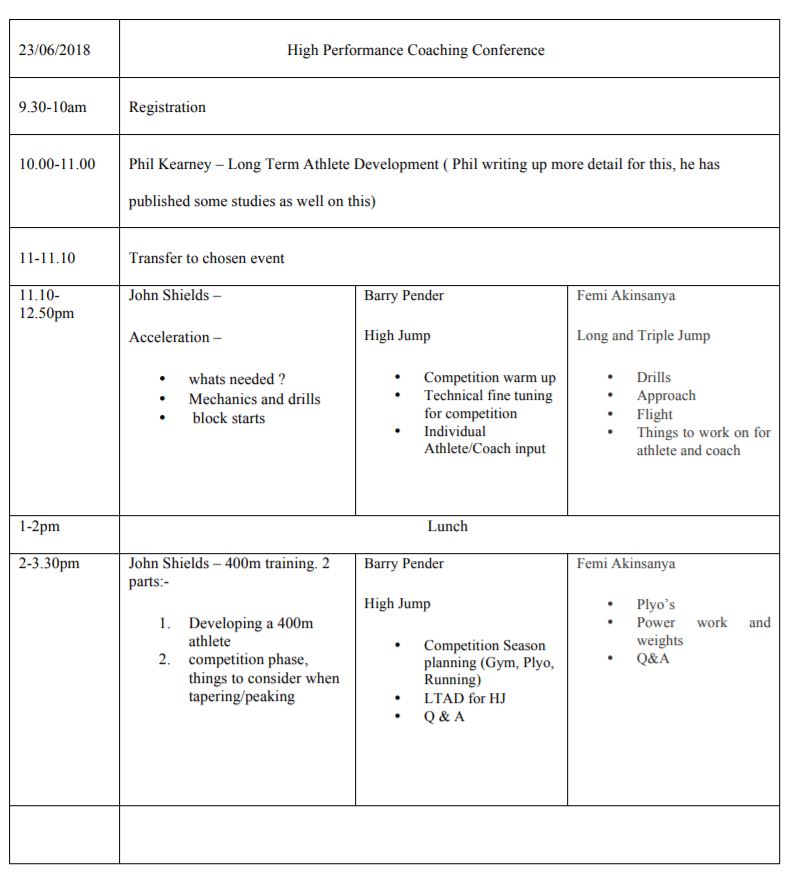