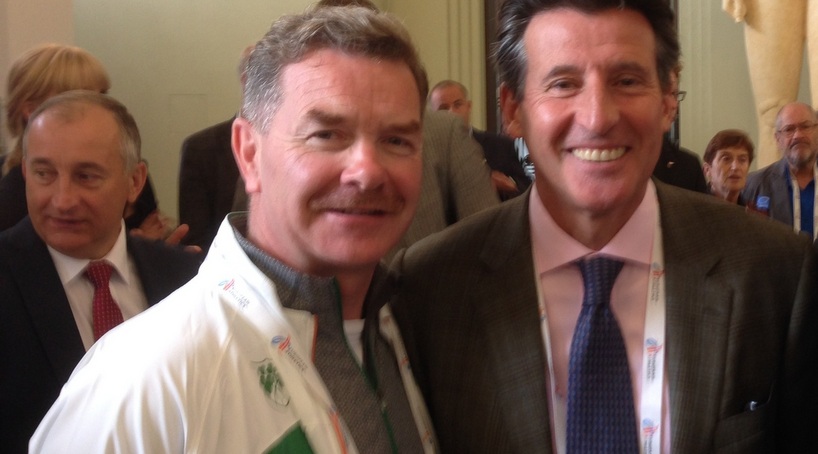 Prior to the IAAF World Championships in Beijing in four weeks’ time, the world athletics community faces the choice of who to elect to lead the sport in the future when IAAF President Lamine Diack steps down after 16 years in the top position.  Double Olympic Champion and Chairman of the very successful London 2012 Olympic Games Sebastian Coe (GBR) and former Pole Vault Champion Sergey Bubka (UKR) are the two candidates standing for election to replace Diack.

Athletics Ireland is pleased to confirm it will vote for Sebastian Coe to be the next president of the IAAF.

Prof Ciarán Ó Catháin, the president of Athletics Ireland said “Seb Coe has all the characteristics, experience and know-how the sport needs in a new leader and we are very happy to confirm in an open manner that we will be voting for him. “He did an outstanding job as Chairman of the London 2012 Olympic Games and has proven time and time again he has the morals, vision, leadership skills and passion to lead athletics into a successful future.  “The board of Athletics Ireland completely support my view on this, and having discussed this with many other federations throughout Europe and the rest of the world, we are confident he will be elected president in four weeks’ time.

“I have discussed his plans extensively with Seb and they mirror the vision of Athletics Ireland in trying to grow the popularity of the sport and bring athletics to new audiences."

Ireland’s 5,000m World Champion Sonia O’Sullivan will attempt to become the first Irish representative ever elected to the IAAF Council and John Cronin will attempt to be elected onto the IAAF Technical Committee.  “It is important for Ireland to have representatives at the top decision making level of the sport and in Sonia and John we have two candidates of the highest calibre and we hope they are both elected as part of this new era for IAAF," added Prof Ó Catháin.

The IAAF elections take place on August 19/20 in Beijing prior to the start of the World Championships.