It continued a stunning 24 hours for the Irish in Estonia, who only 24 hours previous were celebrating the Adeleke 100m gold on day 2.  The haul of now 4 gold medals sees Ireland currently sitting on top of the overall medal table heading into the final day of the championships. It already represents Ireland’s most successful ever championships. 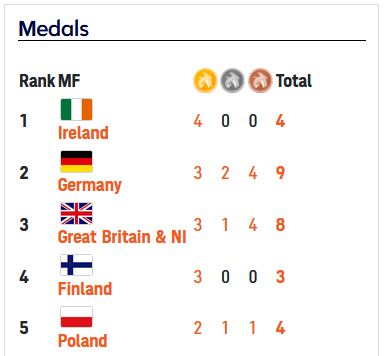 Adeleke (Tallaght AC) started the historic run of results in claiming the 200m gold medal to complete an historic sprint double, smashing her own Irish junior, U23 and senior 200m records in the process.

The Tallaght AC sprint star had eased through this morning’s semi-final in 23.27 before going on to claim victory in the 200m final in the Irish record-breaking time of 22.90.

Adeleke was quick out of the blocks from the gun, but it was the now customary powerful surge around the home bend which saw her move clear of the field to take 0.6 off her own Irish record.

The 200m title completes the sprint double for Adeleke who claimed the 100m title yesterday in just as impressive style, making Adeleke the first athlete since Jodie Williams a decade ago to win a 100/200m double at the European U20 Championships.

Fan’s may be treated to another appearance from the double European gold medallist, with the Ireland Women’s 4 x 400m team set to take their place in the final tomorrow evening.

Irish fans did not have to wait long for another podium performance, with Cian McPhillips (Longford AC) looking all class as he took the 1500m gold medal. The Longford AC athlete provided the Irish in attendance with another moment to saviour as he powered down the home straight in a close fought battle with Rick Van Riel of the Netherlands.

McPhillips raced tactically perfect as he claimed his track position from the gun, before battling it out over the final 200m to cross the line in 3.46.55 (54 second last lap).

The performance from the Joe Ryan trained athlete was the first gold medal by an Irishman at the event since Colin Costello won the same title in 2005.

One of the biggest roars of the day was heard as 16-year old Nicholas Griggs (Mid-Ulster AC) unlocked a final 2:31 kilometer to run away from the field in the 3000m final to claim yet another gold medal for Ireland.

Griggs, who suffered enormous personal tragedy only last month showed race management which belied his years to beat the best U20 athletes in Europe in stunning fashion, crossing the line in 8:17.18.

Fionn Harrington (Bandon AC) also battled on to finish 16th in Europe in a time of 8:29.71 (3000m), providing the Bandon athlete with some great championship experience over the last 3 days.

Robert McDonnell (Galway City Harriers) was in action in the Men’s 200m final earlier in the evening. The Galway athlete secured his place in the final with a 21.29 semi-final performance before going on to claim 5th (21.18) in Europe to complete a brilliant weekend of competition for the Galway athlete. McDonnell now heads for Tokyo as part of the Olympic Mixed 4 x 400m relay team.

Casey Mulvey (Innyvale AC) went in Group A qualifying of the Shot Put from early doors. Mulvey would finish with a best throw of 13.30m and was unlucky to foul on her final two attempts. Her 25th place was unfortunately not enough to progress to the next round. The David Sweeney trained athlete will be heading to De Paul University in Chicago in August and will have a great opportunity to progress further over the coming years.

Diarmuid O'Connor (Bandon AC) is right in contention after day 1 of the Men’s Decathlon. O’Connor currently lies within 49 points of a podium spot on the back of 4 PBs across his 5 events today, which included him smashing his High Jump PB with a 2.00M clearance. The Bandon athlete moved from 10th to 5th over the course of the day for a cumulative score of 4006.

Diarmuid O'Connor will again be first of the Irish in action on day 4 as he continues his Decathlon competition from 7.30am. His final event of the day will be the 1500m set for 4.37pm.

The heats of the Men’s 4 x 100m will see four of the relay team (Israel Olatunde, Adam Sykes, Charles Okafor, Cilian Griffin, James Ezeonu, Sean Harding) take to the Tallinn track for 9.00am. The team will be hoping for a double appearance on day 4 with the final scheduled for 2.50pm.

Aoife McGreevy (Lagan Valley AC) & Laura Mooney (Tullamore Harriers) will be last of the Irish to make their Estonian debuts. They are set to take to the line in the Women’s 5,000m finals, which again look set to be split into A and B.

The Women’s 4 x 400m relay team will round of the Irish involvement at these historic championships.