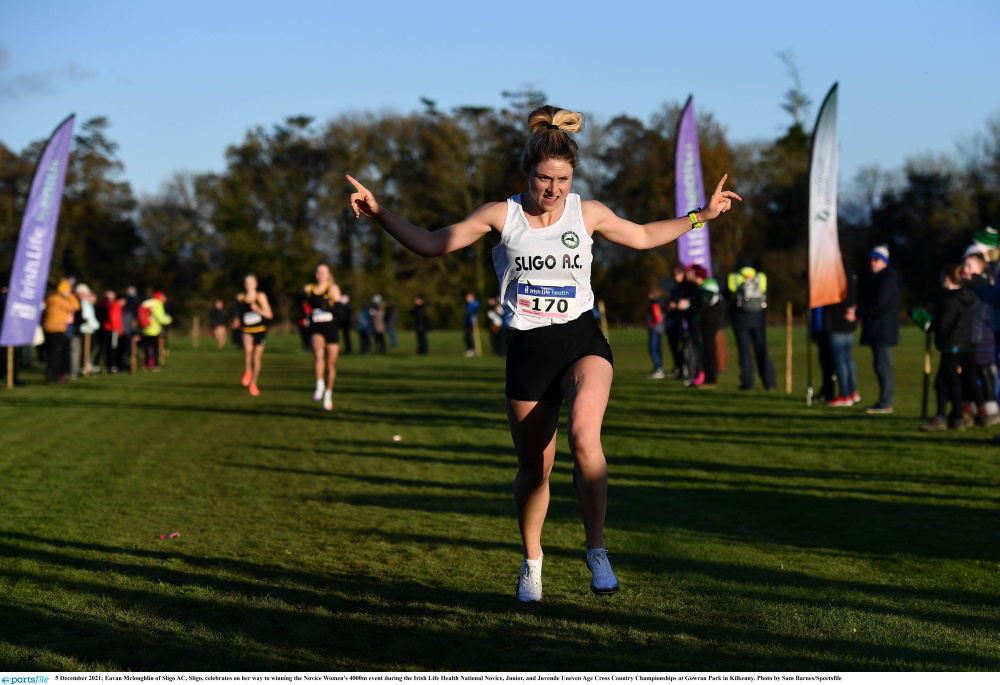 McLoughlin delivered a perfectly timed winning finish to take the women’s novice 4,000m, while Harris could enjoy his finish line celebration having opened up a 10 second gap on his competitors coming into the final 500 meters.

Gowran AC provided wonderful hosts on the day, only to be matched by the spectacular winter sunshine enjoyed by all at the Kilkenny venue.

The 12-race schedule begin with the U11 races were first up where Nellie Bateman (Belgooly AC) and Kenneth O’Connell claimed the first titles of the day which set the scene for some wonderful races and individual performances.

The Renton twins again provided one of the moments of the day as they led home the U13 race with another brilliant performance, Freya finishing just in front of sister Holly for Westport A.C., adding to their already growing medal collection. Luke Walsh (South Galway A.C.) was superb in claiming the boys U13 title in what was a packed finish in the battle for those all-important placings.

Emily Bolton and Lorrain O’Connor completed a 1-2 for Donore Harriers in the U15 girls race in what was one of the finishes of the day, while Francis Donoghue (South Sligo A.C) took the U15 boys title in another great finish.

Lucy Foster looked imperious in taking gold in the U17 race for Willowfield Harriers, while Harry Colbert (Waterford A.C.) had a great battle with Jonas Stafford (Ashford AC) in the boys U17 race, with the Waterford man striding away to gold on the home straight.

Rebecca Rossiter (Loughview A.C) produced a superb display of cross county running to take the U19 title in arguably the most impressive performance of the day. The Loughview athlete crossed the line in splendid isolation having opened a 25 second gap back to the second and third place finishers of Muireann Duffy (Clonmel A.C.) and Claragh Keane (D.M.P. A.C.).

Victory for Matthew Lavery (North Belfast Harriers) made the journey to Gowran Park all the more worthwhile with his brilliant 19:11 display (6k) claiming the U19 boys title. Ennis Track pair of Niall Murphy (2nd 19:21) and Dylan Casey (3rd 19.24) battled it out to complete the podium places.

The penultimate race of the day was the novice women’s race and it proved to be a tactical affair which would eventually go the way of Eavan McLoughlin (Sligo A.C.) who had that little more in reserve over the last 500 meters to cross in 14:09. Christine Russell (Letterkenny A.C.) continued her brilliant season for silver (14.14) and was joined on the podium by clubmate Noeleen Scanlan (Letterkenny A.C.) who secured bronze (14:14) in the tightest of finishes. It also secured the team honours which head home to Letterkenny A.C.

The men’s novice race completed the day, and the cavalry charge of 221 athletes was a fitting end to a brilliant day of competition. Harris would maintain a leading position throughout before making his final and desive move with a lap to go to take the title back to Togher AC.

Jamie Fallon (00:18:53) of Craughwell A.C. claimed silver, while Daniel Stone( 00:18:57) picks up a brilliant bronze for Raheny Shamrock A.C. Leevale take the team title having packed the top 20 places with another great showing.

This rounded out the last major Athletics Ireland event in advance of next weekend’s European Cross Country Championships showpiece at the Sport Ireland Campus in Abbottstown. It promises to be a weekend to remember.