Mulcaire and Pierce Impress at GloHealth All Ireland Schools 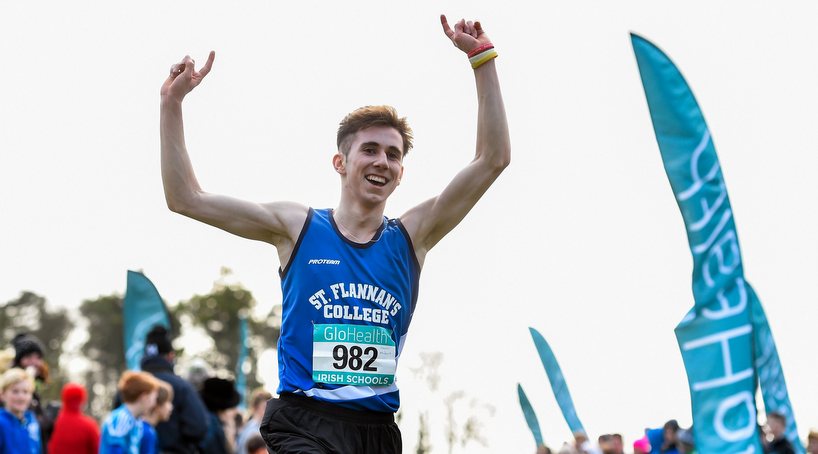 Mulcaire made a big move on the penultimate lap to break the field and storm to an impressive victory in a time of 21.36. Lynch rallied well over the final lap to finish in second place with Fallon rounding out the top three, after miss-judging his effort O’Leary dropped back slighty to finish in eight place. St. Aidans, Dublin won the team title with a score of 91 points.

The girl’s race was a much closer affair with pre-race favourite Hope Saunders (Mt Temple) battling it out with Rhona Pierce (St Angelas, Cork) and Clodagh O’Reilly (Loreto College Cavan) for the title. Pierce made the decisive move with a little over 200m remaining to win the title ahead of Saunders second and O’Reilly close behind in third place. Loreto Kilkenny won the team title with a score of 52 points.

James Edgar (Friends’ School Lisburn) is a name to watch out for in the future as he stormed to victory in the intermediate boy’s race. Edgar wound up the pace ferociously over the last lap to run out the winner in a time of 16.26. Cormac Dalton (St Joseph’s Rochfortbridge) finished second in a time of 16.35 with Eoin McCann (Rathmore, Belfast) third in a time of 16.36. St Flannans Ennis won the team title with a score of 88 points.

There was a great battle between Sarah Healy (Holy Child Killiney) and Amy Rose Farrell (Mount Anville) in the junior girls contest. Healy proved the stronger over the last ¼ mile to take the win ahead of Farrell second and Olivia Nelson (Strathearn, Belfast) third. Mount Anville won the team title with a score of 54 points.