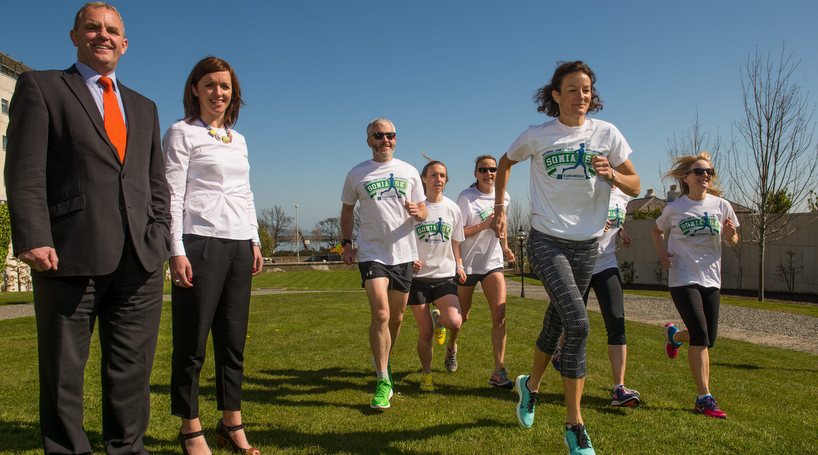 This Saturday, 6th of June is the last day to enter the Sonia 5k, visit www.sonia5k.ie to register now!

The Sonia 5K; in association with Euromedic Ireland, that takes place in Dun Laoghaire on Saturday, June 13th to mark the 20th Anniversary of Irish athletics icon Sonia O’Sullivan’s historic victory in the 5,000 metres at the IAAF World Championships in Gothenburg in 1995.

The Sonia 5K will give participants a rare opportunity to join the former World Champion and Olympic Silver Medallist in this Special Celebration Event on a beautiful scenic route around Dublin Bay – with the start and finish in Dun Laoghaire Harbour.

All finishers in the Sonia 5K will receive a Unique Commemorative Medal - an exact replica of the World Championship Gold Medal won by Sonia O’Sullivan in Gothenburg in 1995 when she became Ireland’s first-ever female Athletics World Champion.

Number collection for the Sonia 5K will take place in Elverys at Arnotts Department Store on Thursday, June 11th and Friday, June 12th with Sonia in-store on the -evening of Thursday from 6-7 pm.

There are also plans for the Sonia 5k race to be brought to Sonia’s home town of Cobh in Autumn the details of which will shortly be announced.

Speaking to Irish Runner magazine on the historic occasion of winning the world title, Sonia O’Sullivan described her simple race plan: “To win - whatever the pace. I just came here to win gold,” she said.

Now a mother of two daughters, Sonia O’Sullivan still maintains a vigorous and healthy lifestyle, residing part of the year in Australia and the rest of the time in London, Dublin and her native Cobh. The ‘Cobh Express’ will be taking part in her own celebration by taking part in the race – an extended victory lap to mark her World Championship gold medal achievement.

“I think it is a novel idea that Athletics Ireland have commissioned a replica of my World Championships gold medal from Gothenburg as a memento for all finishers in the 5K it should make all participants feel like World Champions on race day.” She added: “I really am looking forward to being able to look back and celebrate one of my greatest track achievements with those who enjoy running as much as I do.”

“The Sonia 5K is about much more than running; it is about highlighting the importance of taking time each day for personal health and wellness, it is about encouraging activities and participation in your own personal fitness activities whether you run, walk, or jog and it gives Euromedic Ireland the opportunity to honour the legacy of one of Irelands greatest athletes, Sonia O’Sullivan said Tom Finn, CEO of Euromedic Ireland. “Euromedic is privileged to become the title sponsor of this great event and look forward to the Sonia 5K becoming a permanent fixture on the athletics calendar.”

John Foley, CEO Athletics Ireland said: “We are honoured to be able to mark Sonia O’Sullivan’s crowning achievement on the track. Sonia’s influence on our sporting history cannot be overestimated. She has inspired a generation of athletes to believe that Irish people can be world class. Her influence on women in sport should also be recognised. Among others, Katie Taylor and Derval O’Rourke have regularly mentioned how inspirational Sonia has been for their successful careers.”