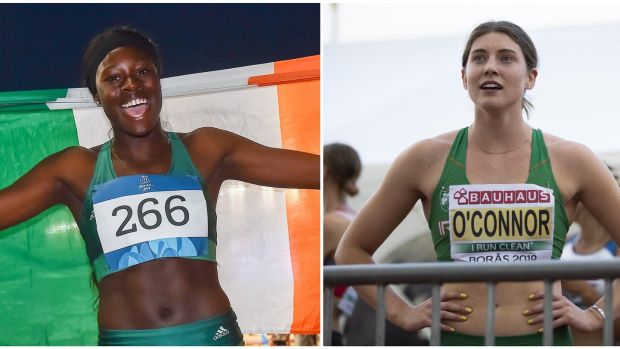 What an incredible month July 2019 was for Irish sport, so good, that our judges felt the only option was to have two winners for Sportswomen of the Month July 2019.

Athletes Kate O'Connor and Rhasidat Adeleke, were both outstanding in their fields and very deserving winners.

Kate O’Connor became the first ever Irish woman to medal at any level, in the heptathlon at the European Championships after she won silver in the Under-20 competition in Sweden. Prior to this momentous win, the young athletics star produced personal bests in the javelin, the high jump and the 200m and was assured of a medal going in to the final event, the 800m. A battling third place finish clinched her silver behind gold medalist Maria Vicente of Spain who amassed just 22 points more.

In conjunction with this, in, Rhasidat Adeleke, was breaking her own records in Azerbaijan. The 16-year-old Tallaght AC sprinter won the 100m in 11.70 seconds at the European Under-18 championships and following it up two days later with victory in the 200m, in a time of 23.92 seconds - the only runner in the field to break the 24 second mark.

Congratulations to Kate and Rhasidat on their incredible sporting achievements that make them worthy winners of The Irish Times Sport Ireland Sportswoman of the Month award. et of achievements from both Sportswomen.

Established in 2004 by The Irish Times, The Irish Times Sport Ireland Sportswoman of the Year Awards recognise the abilities and achievements of women in Irish sports. The awards run over a 12-month period, with the judges selecting a winner each month for her ability to excel at sport. The monthly winner is announced in The Irish Times Women in Sport pages which are published every Thursday.