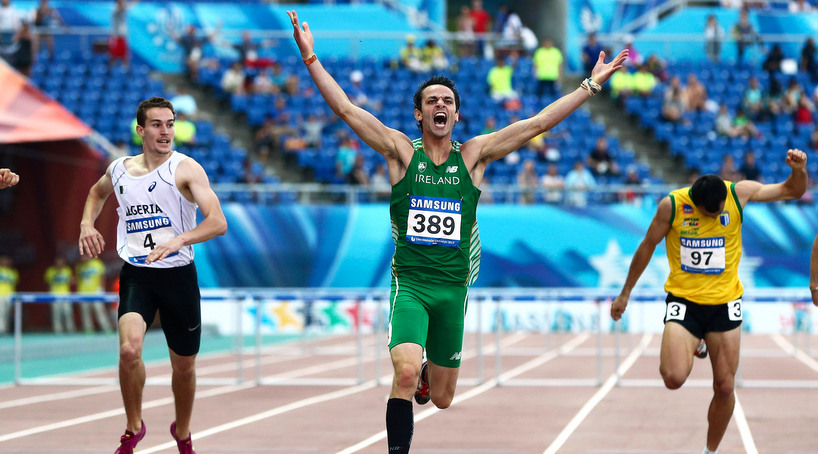 Barr was drawn in lane four for the final having run the quickest time in the semi-finals. The Waterford native made a confident start to the race running smoothly off the hurdles in the chase for gold. The competition was of the highest quality in Gwangju with Barr having to power of the last hurdle to take the title in a time of 48.78 seconds with Abdelma Lahoulou of Algeria placing second in 48.99 and Ivan Shablyuev of Russia third in a time of 49.04.

The time for Barr was only fractionally outside his own Irish record of 48.65 seconds set in Rome on the 4th of June.

Sixth Place for Everard in the Final

Ciara Everard (UCD AC) was also in action in the 800m final as she battled all the way to the line to place sixth in a time of 2.02.46. The final was led out by Jamaican athlete Kadine Simoya as she flew through the first 400m in 56.41 seconds. Everard sat off the fast early pace sitting in fifth place at the halfway mark as the pace continued to soar.

New Zealand athlete Kate Petty managed to pass the Jamaican athlete to win the title in a new personal best of 1.59.06 with Everard placing sixth in a time of 2.02.46.

John Travers (Athlone IT) ran a brave race in the final of the 1500m to place ninth in a time of 3.42.63. The Dublin native made the courageous decision to take his place in the World University Final representing AIT having received the news yesterday that his father had passed away after a long battle with illness.

Travers ran a tactically smart race moving up through the field as each lap ticked by. Andries Hlaselo (RSA) led through the 800m point in 1.58.16 with Travers moving well in fourth position. The race for home was a thrilling encounter with Aleksei Kharitonov of Russia claiming the title in 3.39.13.

Kevin Batt (Adams State University) was the final Irish athlete in action in Gwangju as he contested the 5,000m heats. The task for Batt was to finish in the first five positions in his heat to guarantee a place in the final. As predicted the race turned into a tactical affair with the first 1,000m reached in a pedestrian 2.57.73.

Batt stayed close to the leaders and when it came to the last lap burn up the Adams State University athlete stayed strong a finished in fifth place in a time of 14.19.11. The time and position qualified Batt automatically for the final which takes place on Sunday, 12th of July at 10.20am Irish time.