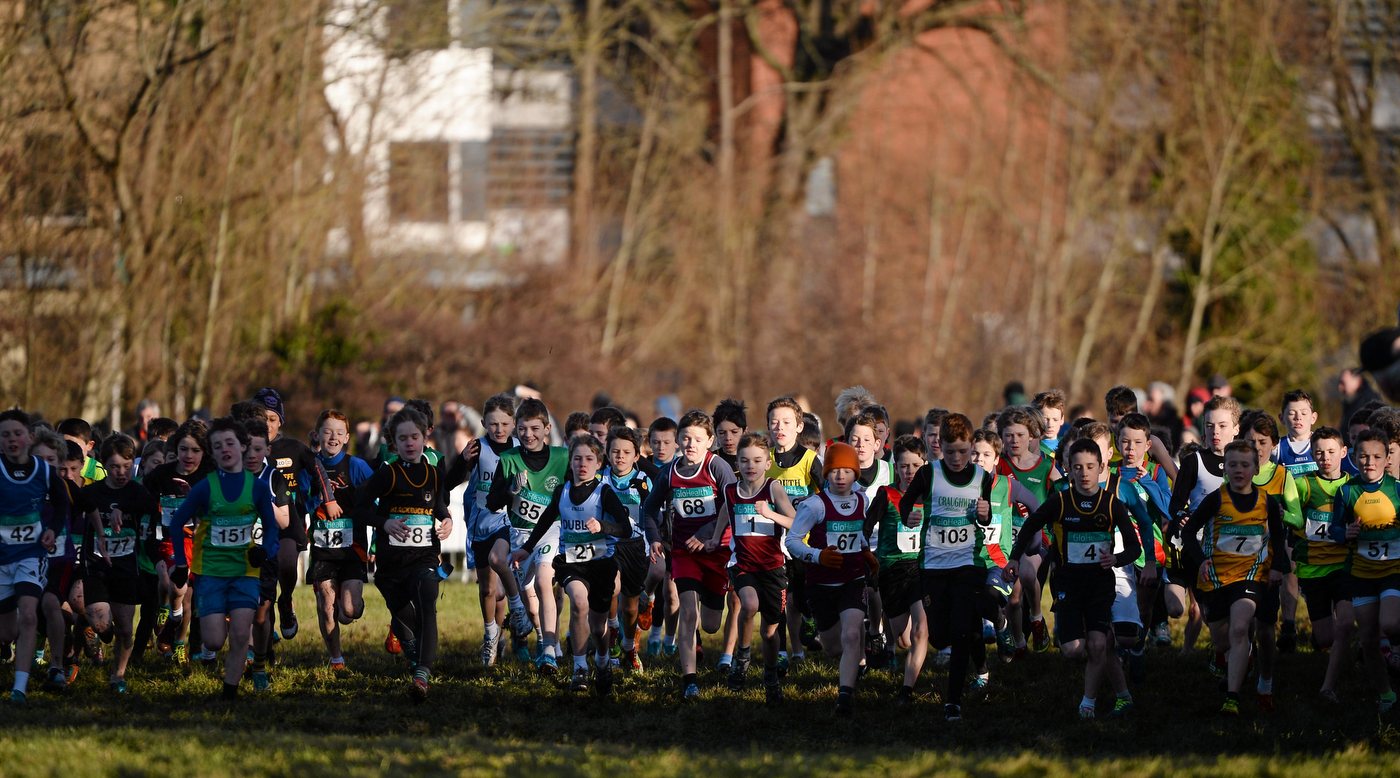 Exciting sprint finishes and thrilling races was the order of the day at the GloHealth National Novice and Juvenile Uneven Age Cross Country Championships. The event brought together over 2,000 club athletes battling it out for the various individual and team prizes on Sunday, 7th of December. Athletes from as young as under eleven all the way up to the novice men and women provided exciting competition for the packed crown in Santry Demesne.

A huge field of nearly 400 athletes sprinted from the starting pens in the last race of the twelve event programme.  After one lap there was a leading group of 15 athletes with athletes from all five regions featuring at the front end of the field. Dara Chesser (Ennis Track AC) took his turn at the front as he kept the pace honest over the 6,000m distance. Ben Thistlewood (Leevale AC) was looking ominously good in second as Thomas Moran (Dunshaughlin AC) and Thomas Hayes (Kilkenny City Harriers AC) were also in close attention.

Thistlewood showed his class as he powered to victory with Moran never letting up as he finished in second place. Hayes maintained his form to cross the line in third place. In the battle for the team title Leevale AC placed first with Donore Harriers second and St. Abbans AC third.

The novice women’s race turned into a head to head battle between Danielle Fegan (Armagh AC) and Mary Ann O’Sullivan (Tinryland AC). The 4,000m contest was an exciting duel between the two athletes with neither athlete giving an inch throughout an absorbing contest. Fegan made a decisive move with a little over 400m remaining and hung on to claim the GloHealth national novice title. O’Sullivan battled all the way to the line to finish second with Sara Doohan (Coran AC) finishing in third place

Peter Lynch (Kileknny City Harriers AC) and Clodagh O’Reilly (Annalee AC) were the respective winners of the U19 titles. Lynch impressed over the 6,000m to take a fine victory over brave front runner Brian Flanagan (Clonliffe Harriers AC). O’Reilly warmed up for next weekend’s European Cross Country Championships in Bulgaria by emphatically winning the girl’s contest. O’Reilly will represent Ireland in the junior women’s race in Bulgaria.

At U17 level Shane Hughes (Mullingar Harriers AC) surged to the front on the final lap to coast to an impressive victory. The girl’s contest couldn’t have been any closer as Niamh Carey (Dundrum South Dublin AC) moved from third to first over the final 100m to claim the national title.

Likewise in the girl’s U15 race Olivia Nelson (City of Lisburn AC) was involved in a titanic sprint with Alex O’Neill (St Cronans AC) as she just managed to clinch the title ahead of O’Neill. James Maguire (Dundrum South Dublin AC) dominated the boy’s U15 race from start to finish.

Corrine Kenny (St Laurence O’Toole AC) surged clear over the last 50m to win an exciting girl’s U13 race. Michael Lawlor (Naas AC) did likewise in the boy’s race to run out a popular winner.  Hannah Breen (Crookstown AC) and Oisin Kelly (Cranford AC) were the respective winners of the girl’s and boy’s U11 races.