Class of 2015 Set to Star at All Ireland Schools 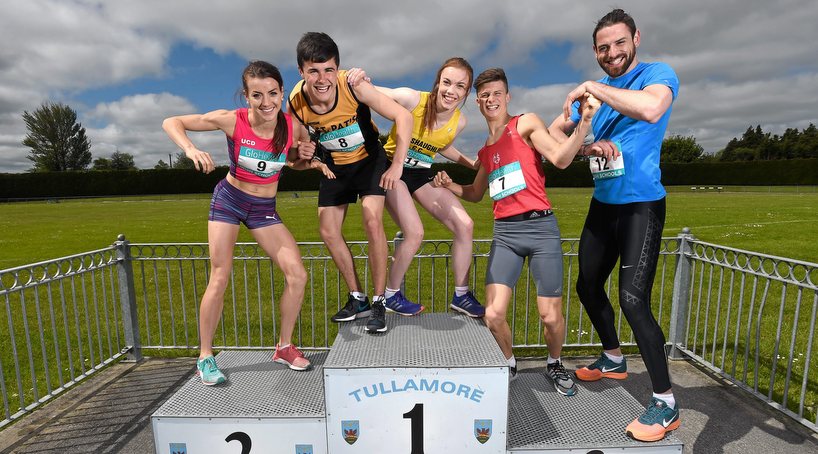 After battling it out at local and regional level, the best of Irish schools’ athletics talent are ready to compete at the GloHealth All Ireland Schools Track & Field Championships this Saturday, 30th of May inTullamore Harriers Stadium.

Athletics Ireland is delighted to announce that the Championships will be streamed live this Saturday. In total there will be 1,000 young athletes taking part from 366 schools across Ireland. A high quality day of competition is expected with many records likely to be broken, tune in live from 12-6pm to see the action unfold.

This GloHealth All Ireland Schools Finals is the culmination of months of tough competition for schools’ athletes throughout Ireland, who have progressed through the provincial championships to secure a much sought after place at the All-Ireland final.

The class of 2015 have already produced a number of eye catching performances this season guaranteeing an exciting day’s competition on Saturday.

GloHealth will be at the GloHealth All-Ireland Schools’ Track & Field Championships in Tullamore on Saturday. Make sure to stop by to pick up some goodies and chat to them to find out about the great benefits Athletics Ireland members can get when they switch to GloHealth.

The hugely talented Kevin Mulcaire (St. Flannan’s Ennis) has been in record breaking form recently having set a new Irish junior 5,000m record at the BMC meet in Trafford on the 16th of May. Mulcaire ran a highly impressive time of 14.02.30 to break the record held by Olympic medalist John Treacy which stood for 40 years.  Mulcaire heads to Tullamore on Saturday where he will start as the outstanding favourite in the senior boy’s 5,000m.

Kevin McGrath (St Pats Navan) is one to watch in Tullamore after blasting to victory in the inter boy’s 800m event at the GloHealth Leinster schools championships earlier this month.

The senior boy’s sprint events are likely to be the closest of the day with Zak Irwin (Sligo Grammer) - Connacht and Sean Lawlor - Leinster both winning their respective GloHealth regional titles.  Aisling Forkan (SM&P Swinford) is one to watch in the senior girl’s sprint events where she will face Munster champion Phoebe Murphy (Loreto Clonmel).

Ciara Neville (Castletroy College) is set to light up the track in the inter girl’s 100m and 200m events.

Irish Junior record holder Mathew Behan (CUS) broke the Leinster schools record with a run of 13.79s in the 110m hurdles. Behan will target a place on the top of the podium in his final year as a schools athlete.  Moly Scott (Scoil Changlais) completed a classy double (100m & 100m hurdles) at regional and is one to watch in the intermediate girls events.

Jenna Bromell (Castletroy College) and Scott Gibson (Bandon GS) will start as favourites’ in the senior 400m events after impressive performances at regional level. Gibson ran a fast 47.60 seconds to win the Munster title as Bromell flew to a 55.36 time on route to victory.

Underage throwing at schools level is at an all-time high with numerous records being broken at regional level. Michaela Walsh (SM & P Swinford) set a new shot putt record of 16.33m as did Andrew Barkley (Belfast High School) in the senior boy’s Discus when he threw a distance of 47.79m. Eoin Sheridan (St Finians) will be the one to beat in the senior boy’s Discus as he recorded a mark of 53.40m at regional level.

Anu Awonusi (Kilkenny College) is an athlete to watch out for in the senior boy’s shot putt after throwing 18.88m at the Leinster championships.  The multi-talented Elizabeth Morland (Dunshaughlin) is set to go in the senior girl’s high jump and long jump events after impressive performances at regional level.

The action packed day of competition begins at 9am with the hammer events and concludes with the senior boy’s relay at 6pm.

“GloHealth is delighted to sponsor Irish Schools’ Athletics and we congratulate all of the young athletes who have made it to the 2015 GloHealth All Ireland Schools Track & Field Championships in Tullamore.  We are very aware of the relationship between participation in sport and its impact on a child’s current and future health. Our partnership with Irish Schools’ Athletics is designed to encourage and support children to maintain a healthy and active lifestyle as well as helping to nurture athletic talent at all levels.”

Kids and adults get €30 cash back on their Athletics Ireland membership with GloHealth’s Family & Kids’ Health package. Adults can also avail of this benefit on the Sports Cover package.

“We are delighted with GloHealth continued support of the schools programme, their support allows us to deliver a high quality schools programme as well as increase participation in the sport as a whole. To all the athletes contesting the All-Ireland finals on Saturday, it has been a fantastic achievement to make this stage of the competition programme. In total there will be 1,000 athletes taking part from 366 schools across Ireland. The day’s completion includes 118 events in what is certain to be a high quality day of competition with many records likely to be broken.  I would like to wish you all a thoroughly enjoyable and memorable day in Tullamore on Saturday.”