Former two-time world indoor 3,000m champion Frank O'Mara has penned a wonderful tribute to Niall O'Shaughnessy who recently passed away. Frank is pictured in the far left of the main feature image when Ireland set the world record for the 4x1 mile relay. Now read on.

Niall O’Shaughnessy died the morning of September 15 in Atlanta, Georgia. He was 59. Niall belonged to a great group of Irish middle distance runners of the 70s which included Eamonn Coghlan, John Hartnett and Ray Flynn.  This group set the tone for the glory days of the 80s which were highlighted by a World Record for the 4 X 1 mile relay set in Dublin in 1985. That time of 15:49.99 still stands as a World Record. The following year, Ireland had 8 active milers who had run 3:55 or faster. 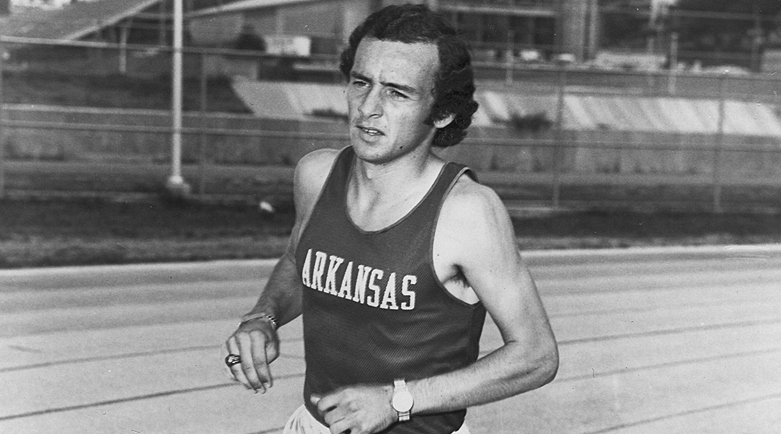 Niall could be considered the George Harrison of the group.  He was quiet and a little distant and only stood out by his action and competitiveness when the first chord was played. He was thoughtful and deliberate and was a great friend and ally to those who knew him. Much like George Harrison, Niall was the forgotten member of the Irish milers club; likely because he walked away from the sport at the pinnacle of his abilities at just 24.

I first met Niall at St. Munchin’s College in Limerick . We were boarders 5 years apart in age. He was a prefect and a top athlete. He set numerous North Munster and Munster records and was coached by the school President, Fr. Ger MacNamee. He was everything an 11 year old wanted to be.  At the end of my first school year, Niall won the European Catholic Student Games in Vittel, France and accepted a scholarship to the University of Arkansas.

A few years later, having shown some running promise myself, I was invited to the priests’ quarters one evening to watch a grainy VHS recording of Niall O’Shaughnessy taking on the world in the US Invitational Meet at the famous Madison Square Garden. Two weeks previously, Niall had run the second fastest time ever in the World for the mile – 3:55.4.  He was running against Dick Buerkle who had been dominant on the US Indoor circuit for a number of years. Niall sprinted away at the bell and won the 1500m in 3:39.8.  Niall was only 5’6”, but he had enormous grit and possessed a spectacular kick. It was a great achievement to win at the Garden as a college kid, and I immediately knew I wanted to follow Niall to Arkansas.

Niall was very fastidious and organized.  His whole life was planned in terms of decades and not weeks like the rest of us teenagers.  When John McDonnell, the legendary coach of the University of Arkansas, came to Adare to recruit him, it was Niall who laid out the conditions for him to accept a scholarship. He told John that while in school, education would come first and running second, and after graduation work would come first.  The quote from the forgotten Beatle – “when you don’t know were you are going, any road will get you there” did not apply to Niall O’Shaughnessy. He knew precisely where he was going and the exact road he would take.

There has been much written about the demise or disappearance of Irish runners who go on scholarship to the US. Niall was not one of those for whom the experience was too demanding.  He graduated with a Bachelor’s of Science in civil engineering and subsequently attained a Master’s in environmental engineering. He had rare success too in his secondary pursuit of athletics. He was the youngest Irish Olympian in the Montreal Olympics at 20 years of age, competing in both the 800m and 1500m. He broke the Irish record for the 800m at age 19 with a time of 1:46.79. He ran the 2nd fastest time ever in the World for the indoor mile at age 21 and was runner-up in the NCAA Mile in both 1977 and 1978.  He held the European indoor record for the mile at 21.

His most spectacular performance may have been his 7th place finish behind the winner Henry Rono in the 1976 NCAA Cross Country Championships with a time of 28:43.16 for 10,000m.  Niall’s ability to focus and compartmentalize, something he likely learned in boarding school, helped him to juggle academics and athletics. He stayed on that road full of college distractions, while many others took detours.

In 1980, Niall was finishing his masters and also preparing for the 1500 at the Moscow Olympics.  He had run the qualifying time of sub 3:40. But he was faced with a dilemma. He had accepted a job with the State of Arkansas as an environmental engineer. President Jimmy Carter had announced that the US would boycott the Moscow Games over the Russian invasion of Afghanistan.  As Niall had declared to Coach McDonnell as a teenager – work comes first, running second, so Niall sided with his employer and declined the opportunity to line up for the 1500m in the Luzhniki Stadium. He never ran again.

Not many 24 year olds would walk away from that opportunity and ultimately turn their back on a burgeoning athletic career but Niall was different.  He was deliberate and even stubborn at times.  He would hold steadfast to a decision regardless of vocal input from others to take a different path.  His decision turned out to be prudent.  He had a wonderful 35 year career as a respected professional engineer.  He specialized in trouble shooting water quality issues at major plants and mills. He was regularly called on to assess and create remediation plans after possible contaminating run-offs.  Additionally, plant managers relied on Niall to project-manage any clean up required and identify shortcomings in the plant’s operations.

Niall was a success in both his primary and secondary objectives in life, but he was still one of the warmest and most caring people I have ever met. Lately, when we would talk, he was more interested in my far less worrisome health issues than his own frightening predicament. He was reliable and steady; somebody who always had your back.. Niall had a very strong moral compass. He was keenly aware of who he was and what he stood for. He believed that a good life would be rewarded.

He knew where he was going, even at the end.