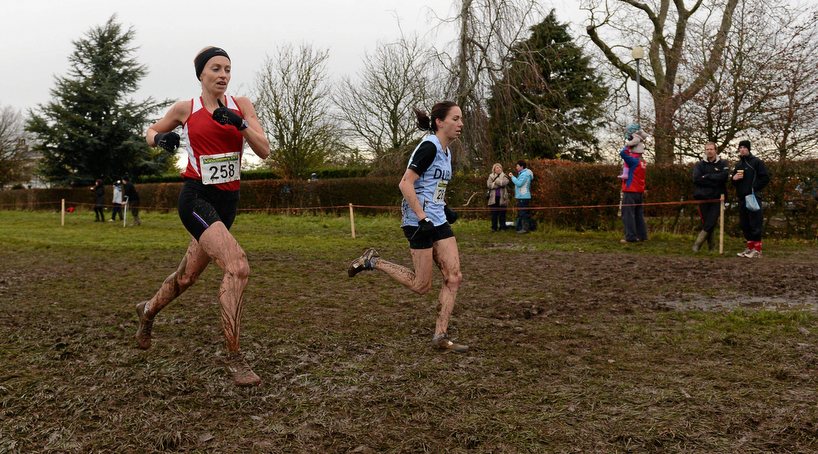 The cross country cast of 2014 are set to make their mark at the GloHealth Inter County & Even Age Cross Country Championships in Dundalk on November 23rd. Athletes entering the 2014 championships are advised that online entry will close this Friday, 14th of November with strictly NO ENTRY after this time:

The spectator fee for the 2014 event is €10 for adults with children U16 going free, make your way to DKIT, Dundalk on November 23rd to see who makes their mark in 2014! On our build-up towards the championships we take a look at back on the individual and county team winners over the last four years.

2,000 athletes headed to Grensha Grounds, Derry in 2010 and along with the testing distances the athletes also had to contend with freezing conditions and a snow covered course. Fionnuala Britton (Kilcoole AC) announced herself on the national stage with a clear cut victory over Lizzie Lee (Leevale AC) in the senior women’s race. This was Britton’s first Inter county Title improving on her fifth place from the previous year. Joe Sweeney (Dundrum South Dublin AC) started his domination of the Inter County Championships with a victory in the senior men’s race.  Ciara Mageean (UCD AC) and Shane Quinn (Ferrybank AC) were the respective winners of the junior races.

Excessive rain on the lead up to the championship meant Ratoath, Co. Meath was a mud bath with a real cross country test in store for the athletes competing. Ava Hutchinson (Dundrum South Dublin AC) and Lizzie Lee went head to head in the senior women’s race. Hutchinson proved the stronger crossing the line in 31.06, only four seconds ahead of Lee (31.10). Sweeney continued his domination of the senior men’s race coasting to victory in a time of 33.27. The Mulhare siblings made it a family affair with Michael (Portlaoise AC) placing second in the senior men’s race and younger sister Mary winning the junior women’s race. Stephen Kerr (Armagh AC) was a popular winner of the junior men’s race in a time of 20.53.

Santry Demesne proved a popular choice of venue for the 2013 event, the same course that had staged the European Cross Country Championships in 2009. Double European Cross Country Champion Fionnuala Britton impressed in the senior women’s race. The Wicklow native’s popularity soared as she engaged with all the young athletes that came to see her run. Sweeney finally lost his stranglehold on the senior men’s title with Paul Pollock (Annadale Striders AC) stepping up to win the title. The Mulhare brothers Michael (2nd) and Dan followed Pollock across the line with only four seconds separating them at the finish.

Dublin has dominated the Inter County Team aspect of the championship having won the men’s title for the last four years. The women have experienced similar domination the one exception being in 2011 when Cork took victory.